Not because I got my first home permanent like all the other Koreans, no no (I Love Lucy reference for the uncultured folk)…

But because this lovely little Korean lady named Lucy gave me my first Far East hairdo!

My do rag was long overdue for a chopping. It’s been like 10 months or something since my lovely friend Rachael back home chopped it for me just before that guy Mike came to visit me in April.  Anyways, I have been wanting to cut my hair but thought maybe I’d just let it grown out for winter, but then last night I decided I was sick of it and plus, it was so dead and needed a sprucing up.

Done with the boringness, I found out the name for the place Abby just got her hair cut at, and did some other research last night because I was kinda scared to just try anywhere here.  My hair is very very very different compared to Asian hair, so tricky sitch ya herr? I ended up finding rave reviews for this chick Lucy online, who had worked in London for like 6 years, and plus Abby’s hair looks BOMB. So I made the appointment this morning for 4pm today.

Lucy owns the studio and it’s in Sinchon, which is one stop away from Hongdae in Seoul. I got there a little early, being all eager and all, and when I walked in the place was empty, so at first I was like “eeep!” But, they took me right away (obv).  I showed her this hott pic of Rihanna for inspiration, and then I was swept off to get my hair shampooed and my head massaged.

But yea, twas a totally normal great hair salon, minus the fact it felt a little awkward and silent at first.  She had another guy comb my hair and she was handing him combs.  It was odd, but then she jumped in. She also told me that their busiest day is Saturday, and that Sunday is usually slow.  Good to know.

A little bit into it we got to talking talking talking and she was so funny. She even answered my unasked question about wanting to maybe ever be able to get bangs.  She’s just cutting cutting cutting and tells me “You should never think of getting bangs.” That answers that question.  Thanks cowlicks all over my head.  That’s when we started talking about how honest Asians are.  She told me a story about how one of her clients’ principals (who didn’t speak very good English) told him “he looked delicious” when he was dressed in a suit for work one day (maybe he meant intelligent? smart? handsome even?).  I told her about MayMay’s mom’s being very honest when she noticed I put on or lost a couple L-Bs, or when my students or co-teachers comment on a fresh new zit that’s sprouted on my cheek that they think I’ve missed the memo on.  Silly Asians gotz no time fo sugar coating. 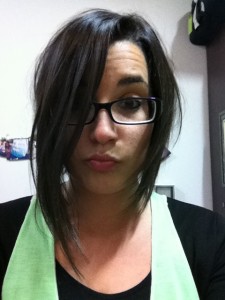 And since who knows if other foreigners are reading this with the same questions I had, she told me 90% of her clientele are foreigners and everyone there speaks English.  The salon is called Lucy Hair (02.325.2225).  Get off at Sinchon (near Hongdae, NOT Sincheon near Jamsil) exit 1, go straight til you see Natuur Ice Cream and turn right.  She’s just on the right on the 2nd floor of the T World building.

One thought on “I Love Lucy!”