When deciding to move to another country, especially one so different from your own, you obviously put together a list of things you have to do when you’re there.  I made a Korean Bucket List during my whole research and application process,which has continued to grow since getting here, and in the past month I can say I’ve successfully checked off 3 big things. Therefore, this will be a somewhat video-heavy post topped off with my old lady laugh in most.  Hope ya don’t mind-uh.

2. Eat octopus…again.  This time purchase a living, breathing octopus and then eat it while still alive.

3. Go to the DMZ.  AKA the De Militarized Zone AKA the most heavily guarded border in the world.

De Militarized Zone. There’s barbed wire with a flower on the “M”

The ribbons behind us have notes on them that many families have written to family they still have in the North, and hopes for a unified peninsula one day.

On the Freedom Bridge, where people escaped the North to the South after the war. 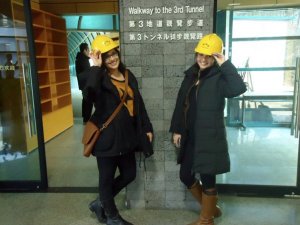 Just trekked it down and thru the 3rd Infiltration Tunnel.  Got our exercise in for the day! 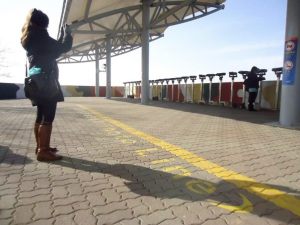 It’s forbidden to take pictures past this yellow line.

Us with a backdrop of North Korean mountains.

In addition to quickly checking things off my list, I celebrated my first Korean birthday.  And as if turning 28 wasn’t enough, I’m technically 29 according to Korea. Blah.  The way that works is that when you are born in Korea you are considered 1 yrs old, and then on the 1st of the year everyone gets another year older, then another year older on your actual birthday.  So I turned 28 on the 1st and then 29 on the 20th. Bahumbug.

ANYWAYS, digging myself out of that sad old hole, JACQUIE came to visit me for my birthday!  I don’t think anyone has ever done anything that nice for me before!  I made the 2 hour trek from the Dontgogay to pick her up at the airport last Wednesday (and another 2 hour journey back!) and she came to my last 2 days of camp with me on Thursday and Friday.  She of course fell in love with how cute the kids are, especially one little peach named Lisa, who gave us both matching gold rings on my birthday 🙂 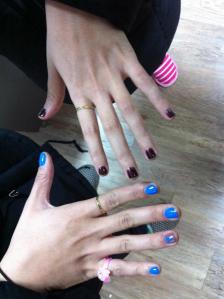 One of my other most adorable 5th graders, Jena, gave me a notebook with glasses on it, a white board pen (because mine are always running out of ink) and some candy.  Adorbz and so thoughtful.  I love her. 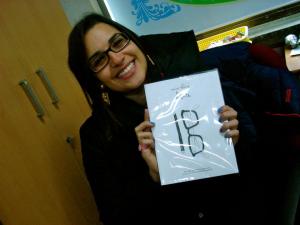 When camp was over all the little girls wanted pictures with me and Jacq, so it was the perfect completion of Hollywood week.  Nothin like getting caught in the middle of a paparazzi storm, especially with little Koreans pumpkins.  Trust me, I’ve been involved in a paparazzi storm or 2.

My birthday was absolutely lovely, despite being a little sad that I wasn’t spending the standard January birthday-sharing with my MayMay lover, and of course all my friends back home.  It was definitely amazing having Sista here to fill the missing-home void.  That night a bunch of us went to a wine buffet at the Artnouveau Hotel in Yeoksam, which I must say, was quite the classy venue.  I’ve been invited to it a couple times in the past and always flaked, so when I wanted something out of the ordinary to do this year it seemed like the perfect idea…and it twas! 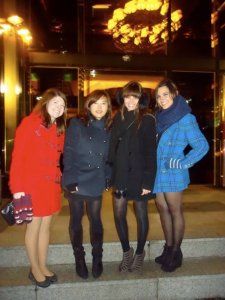 Well, after who knows how many bottles of vino and how many pieces of delicious sashimi, the night took a turn for the trashy as we headed to the not-so-classy Monkey Beach in Apgujong (like the Beverly Hills of Seoul).  Since it was my birthday, I got a free bottle of tequila.  Eeep! Soon enough tequila shots, buckets of booze and Abby’s ass were flying all over the place. 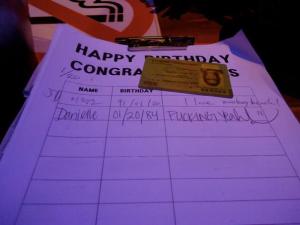 All in all, twas a wondrous birthday!  The rest of the weekend I took Jacq all over Seoul.  We were literally out all day everyday and we were exhausted and freezing!!!  Even though it was so tiring, it was nice to play tourist again and revisit some of the spots that I went to right when I first arrived.  One of my fave places in Seoul is Namsan (or Seoul) Tower, which we hiked with Abby.  It wasn’t so cold walking up, but once we got to the top we reached a level of cold that I have never felt before (except for the night in Insadong with Jacq!) Our fingertips felt like they were gonna fall off it was so cold, so we ate pancakes, took pictures with the love lock trees and even locked a lock of our own up there reallllly quickly! 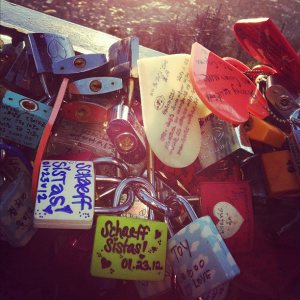 It’s hard to believe that my 5 month anniversary just passed, that I’m off to Vietnam and Cambodia in 3 weeks and that my freakin sista was just here!!! Time freakin flies when you’re having an amazing (sorry for the cheesy) time! Now, I will leave you with this fantastic video of quite possibly the best, most enthusiastic teeny bopper of a cab driver ever.  Sorry it’s dark and don’t hate on my loud old lady laugh, I warned you.  Enjoy!  Now I sleep.