2 weeks ago marked the last long weekend I will ever rejoice in during my time in Korea. That’s if you don’t count the one during summer camp in August, but I’ll totally be checked out by then and camp will be donezo! My original plan for the long weekend was to visit Haesindang Penis Park on the east coast, close by to Samcheok, where I got a case of bed bugs when Josh and I went to Dokdo last year. Pretty soon everyone started flaking, and as much as I wanted to still go, visiting a penis park solo seems a little too perverted, even for me. Plus, who would document me atop many a phallus?

With that, I decided to head out on my own and check out a couple more islands that are just off the west coast of Incheon. I went to Muui-do during my first Chuseok in Korea and fell hardcore in love, so thought it’d be nice to add a couple more islands to that list. Ganghwa-do is about 2 hours by bus outside of Seoul, and Seokmo-do is about a 15 minute ferry ride from Ganghwa-do. Both islands are very prominent in Korean history, as they served as a fortress island during several invasions by France, Japan and America. It is also as far north as you can get, as it’s just separated from North Korea by the Han River extending out from Seoul.

When I arrived at Ganghwa-do Bus Terminal, the tourist information guy was SO helpful. I didn’t really have a plan, but knew of some sites that I wanted to see. I had also just planned to find a jjimjilbang (Korean bath house) to spend the night at. The man instead told me that Bomunsa Temple on Seokmo-do offers overnight temple stays for 10,000won. It wasn’t a traditional temple stay, but rather a mat to sleep on in a communal woman room, with meals (and snores) all included. I took his advice and headed out to catch the ferry to Seokmo-do.

The bus to get to the port took FOR-EVER. Many people take their cars over to Seokmo-do, so the traffic was horrendous. What would typically be a 35-40 minute bus ride took over an hour, at which point I hopped off and walked the rest of the way to the port. When I got to the port there were tons of little shops selling shrimp chips and special ginseng makkoli. A specialty of the island is their dried shrimp, and the seagulls that follow the boat over to Seokmo-do are very greedy when it comes to those shrimp chips! 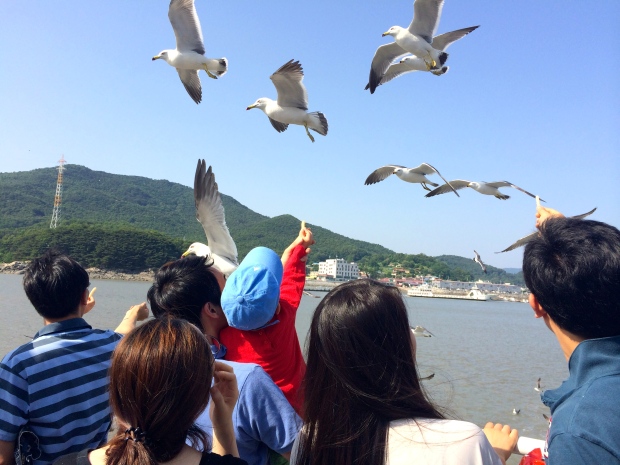 Here is the only photo of myself from the weekend. Not much for selfies, but seagulls aplenty! 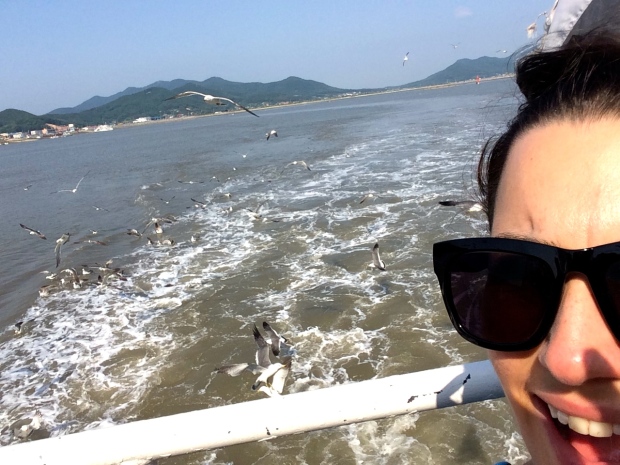 I finally made it to Seokmo-do, and had to figure out how to get to the temple. The guy manning the bus stop was a little flippant when faced with my foreign face even when I was speaking Korean, but I met a couple girls on the bus who spoke really good English and chatted me up. They figured out that I’d head out on the same bus as them on their way to the beach.

When I got to Bomunsa, the base of the temple was littered with old town Korea, which made me so happy. Tons of old women hunched over their little shops of bowls of nuts, and ddeok (rice cakes), and dried shrimp. Tons of dirty fingers handing me samples that I didn’t want to be rude and not try in front of them, and tons of samplings of makkoli. I found myself using far more Korean than I typically do living in Seoul, which impressed even myself that I could verbalize things I thought I only really knew how to understand. 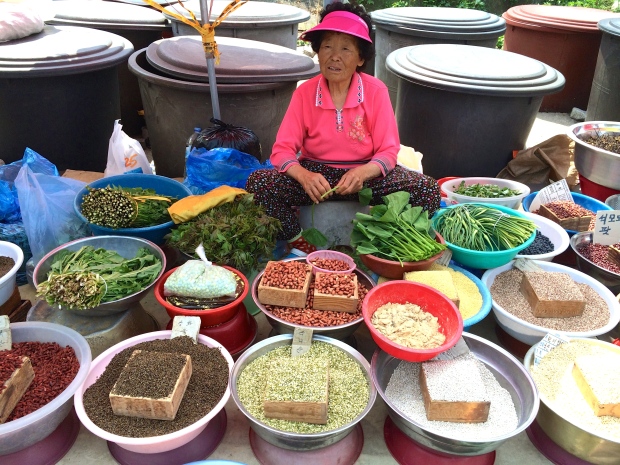 Getting up to Bomunsa is quite a job for the ass and calf muscles. But it’s a really beautiful walk up, and the temple itself is lovely.

What I wanted to see most at Bomunsa were the hundreds of Buddhas! Just as you arrive to the top of the hill to your left is a procession of all these white Buddhas with different faces and expressions. I saw a bunch of people also throwing coins to the big statue in the center, so I’m thinking that’s to make a wish or pray or something.

The rest of the temple was pretty standard when it comes to Korean temples. Very beautiful, but nothing I haven’t seen before, aside from the massive reclining gold Buddha in one of the temples.

See that flight of stairs to the right? That leads all the way up to the top of that mountain, where there resides a Buddha carved into the side of the mountain. People who were there on a weekend temple stay were doing their daily prayers with the sea breezing behind them. 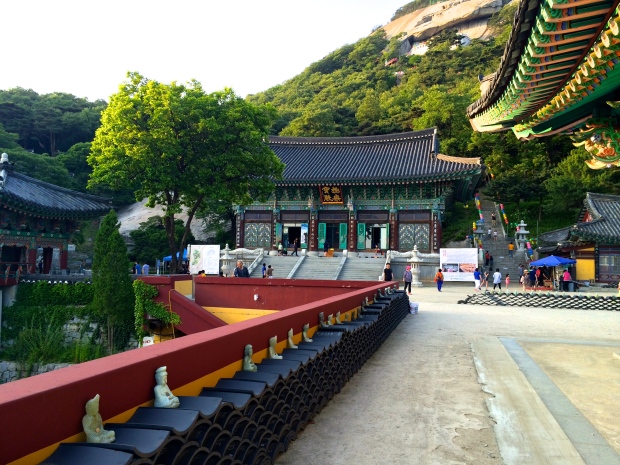 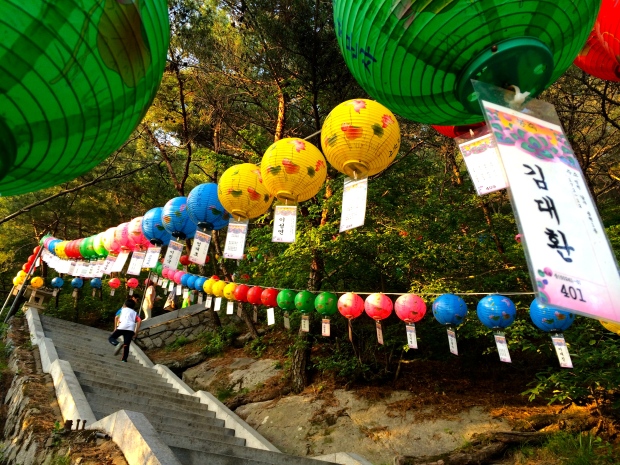 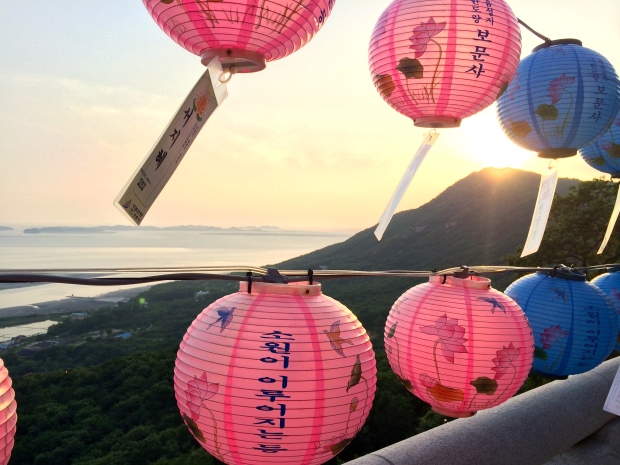 No trip in Korea is complete without a selfie or two, give or take a nice backdrop, or not.

I was also VERY proud of myself for not pulling a Danielle and plummeting down this flight of stairs during my descent. Pat on the back, me!

When I successfully landed on flat ground, I checked into the temple for the night and went to eat some dinner before it closed. The dinner was my least favorite Korean food, bibimbap, but I liked knowing that since I was at a temple there was no need to worry about any weird meats finding their way into my bowl.

For my slumber, I was given a mat, blanket and a rectangular pillow that I laid out in the middle of a bunch of ajummas for the night. As the only foreigner, I was quite the attraction amongst these women. There were two sisters that I was sleeping next to, and they showered me with Korean melon, candies and ddeok for days. Through my broken Korean and their broken English, we established that one of the sisters has 2 granddaughters that are half whities and were born in America. She then proceeded to call her granddaughters to have them translate all the burning questions she had for me. She even asked if she could come to my house because “she wants to see how I live.” I had a good laugh about that one with her 7 year old granddaughter, Grace.

That night I fell asleep at like, 10pm, after a failed attempt to read my book because they kept tapping me to ask another question. So I just fell asleep instead so I didn’t have to deal. I can’t even remember the last time I went to bed that early. I also had to sleep with my headphones in because there were so many ajumma snores. It was pretty unbelievable. 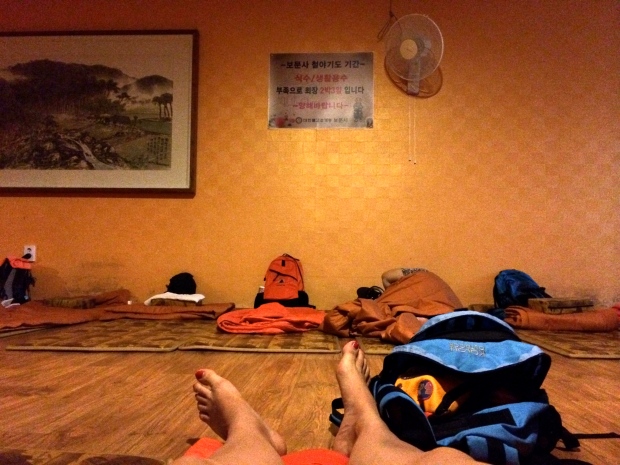 At around 5am I was jolted awake with pieces of candy being thrown at me. It was like I was a little sugar animal or something. The sisters were trying to wake me up to have breakfast with them, but I couldn’t be bothered to get up that early, let alone eat kimchi for breakfast. So I continued sleeping for most of the morning. At around 10, after 12 solid hours of slumber, I woke up to them staring at me and asking to have lunch with them, but I wanted to jet out. And jet out I did.

After a quick rinse, and by rinse I mean taking the shower nozzle and wetting my legs and arms, then slathering myself in lotion, I was off. I felt so dirty but I was not about to take a legit naked shower in the communal shower area with flies and weird smells aplenty. So I probably smelled pretty potent.

I grabbed some free fried vegetables for the road, a bottle of ginseng makkoli for later, and admired the delicious kimchi being made. Gotta get me a baby kimchi pot before I leave. 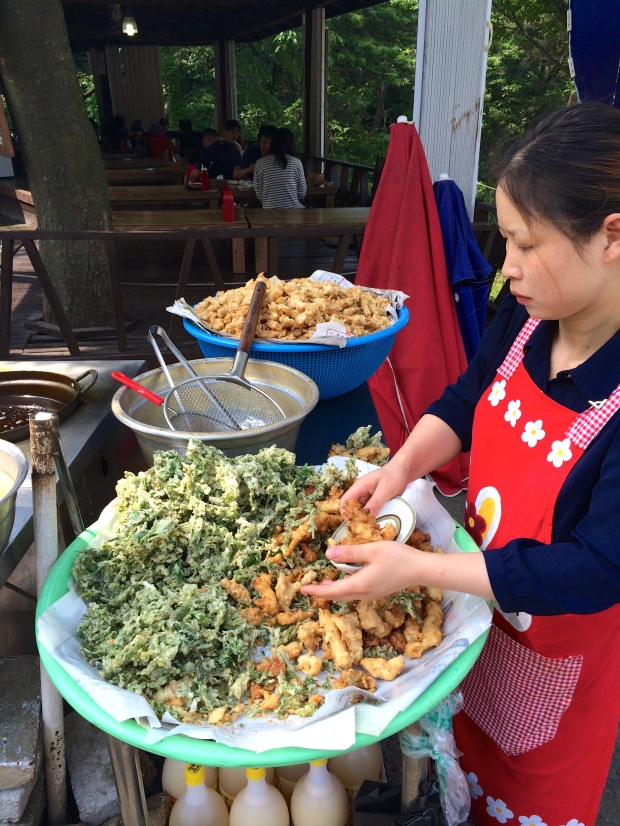 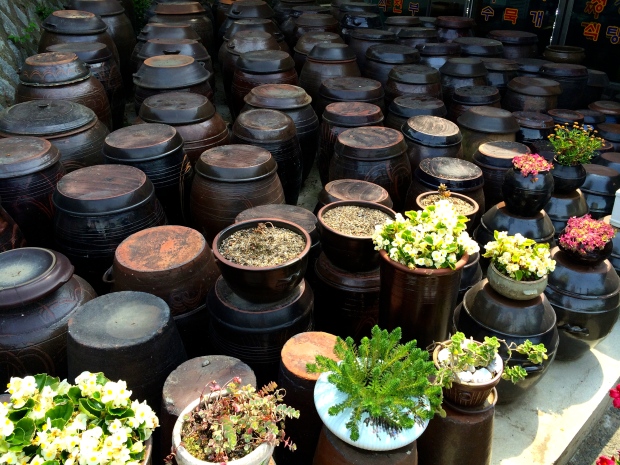 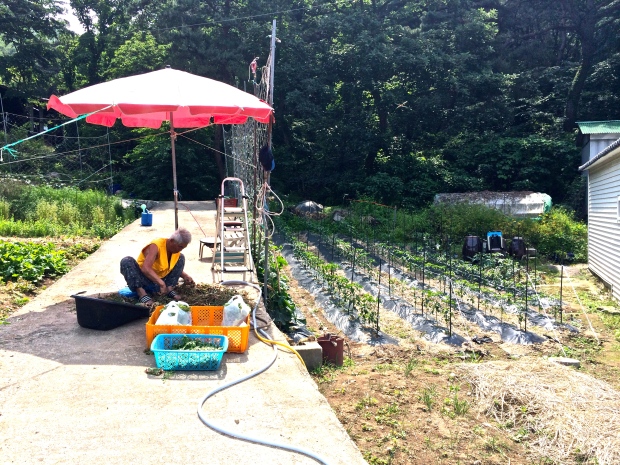 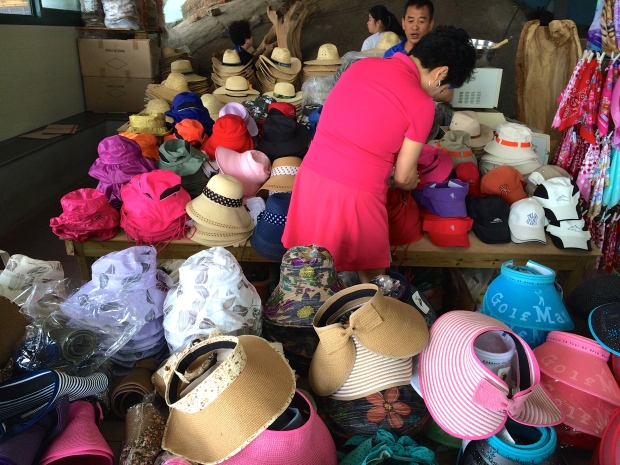 I caught the bus back to the ferry, and the ferry back to Ganghwa-do, where I popped off to go see the ancient dolmens with these fashionable travel companions.

The dolmens are a UNESCO World Heritage site, and serve as grave markers for past rulers or high-up people. To me, they looked like a Korean version of Stonehenge on a much smaller scale. I was not impressed, so this journey took me all of like, 15 minutes to get through. 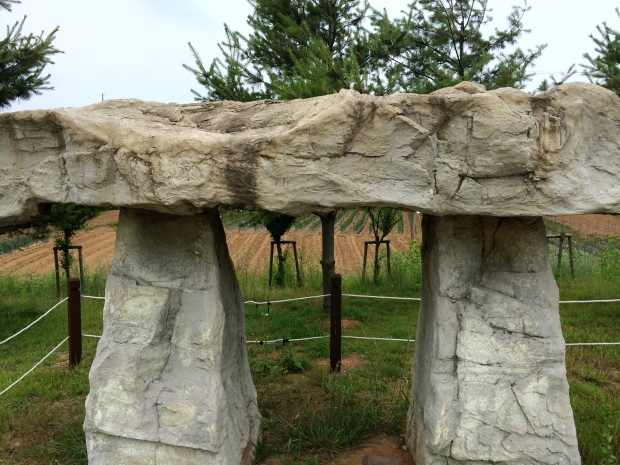 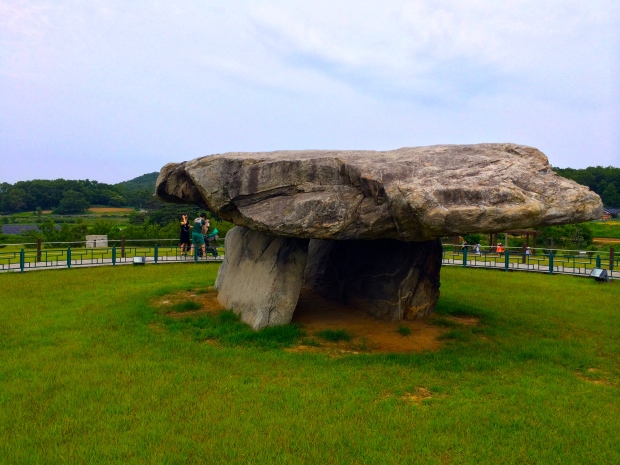 After seeing the dolmens, I thought I’d go to the Peace Observatory to wave hello to Kim Jong-un, but I was a bit pooped and in desperate need of a bath, so decided to call my little trip over after a wander around downtown Ganghwa-do. I checked out a little flea/produce market, and saw enough garlic to keep all the demons away. It smelled so delicious.

If you’re looking for a quick, cheap, and easy getaway out of Seoul for a couple days, this is a lovely option. To get there, grab the 3000 bus about a 5 minute walk from Sinchon exit 5 (green line). It’ll take about 1.5-2 hours to get to Ganghwa-do, and busses leave every 15 minutes. Once arriving at the terminal in Ganghwa-do, the tourist information man is extremely helpful. I believe I used busses 1 and 30 on Ganghwa-do, and there’s only 1 bus you need to use on Seokmo-do. You can also use your T-Money card for all busses, and I probably spent about 6,000won in total for all transportation on both islands. Not too shabby!

18 thoughts on “Island Hopping Off Incheon”