I still remember the first pair of spectacles I ever owned.  I was in 2nd grade and they were a very stylish plastic girly frame fading from magenta to purple to a deep blue.  It was pretty much love at first “ok, if I really have to wear them.” We bought them in the shopping center in Agoura where Subway and TJ Maxx are.  I swear I have the most freakishly weird memory for odd detail.  I had those for a second, then I graduated to these brown and black speckled gems, which I believe I really should have kept because I could have rocked them all these years later, but of course looked (and posed) a whole lot cooler. 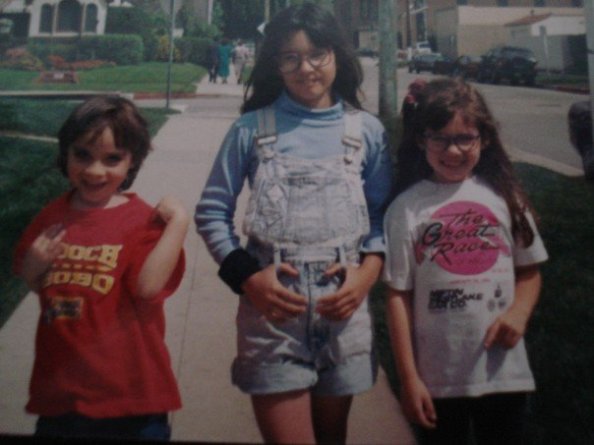 Then in 4th grade Mama Schaeff forced me to go to Eye Therapy so that I could start wearing hard contact lenses and stop imitating my dad putting his own contacts in with my own piece of very thin ice…(there goes my memory again).  I HATED Eye Therapy, but I think in some odd way it made me develop a bizarre love for going to the eye doctor. So, then in 4th grade I was forced each morning to pop my hard contacts into my eyeballs even though they felt really weird, and then pop them out of my eyeballs with this tiny plunger because I was too young to figure out how to do it with my own two fingers. This is what I looked like every night, minus the fancy nail polish, and i bit my nails back then:

Then I grew up a little and decided I wanted my eyes to be different colors, and those colors only came in soft contacts.  So I had blue eyes and really green eyes, and then my eyes got fucked, for lack of a better word. Those contacts were really bad, especially when worn for too long. They’re not specifically shaped to your eye and then the printing that goes onto the lenses is also not very good.  In mid 2006 my eyes started getting really red all the time, probably because I would get drunk and pass out in my contacts, but then it would just never go away, and then it got worse.  It was to the point where I could barely see when I would drive and even looking at the computer would hurt my eyes and they’d water uncontrollably.  Most of you know the long story, but after countless optometrists, ophthalmologists, eyedrops and months, I had Keratitis, or a really bad bacterial infection, thus resulting in the spectacles that are now part of my essence.

It actually took me a while to get used to having to wear them all. the. time. I hated having something covering my face, it felt ugly and like people couldn’t see ME.  Then it just flipped and they became a part of me, and before long I felt weird without them. Now I’m pretty much at the point where I feel normal with or without them, but very much “Danielle” with my spectacles.

Now that I’m in Korea I have decided to get laser eye surgery, something I have always had in the back of my head because, well, why not? But, I’ve always envisioned it as something out of reach because in the States it’s so expensive, the charge is per eye, and my eyes have been through the ringer and back.  Korea, on the contrary, offers the surgery for a flat rate and for even less than half the cost I’d pay back home.  At home I would probably be looking at paying anywhere between $5,000-$7,000 total for both eyes with my vision, astigmatism and myopia, whereas in Korea I’m going to be looking at around $1,300.  Many of you are probably thinking “UMM Danielle, is it safe????? Don’t DO THAT.”  But it is.  Korea is LEGIT. It is a 1st world country, and is actually a major surgery destination in the world.  Many people come here specifically to have any number of surgeries done because it is so highly regarded and so frequently practiced with top notch doctors and results.  So not to worry.  I have also been on three different consultations to weigh all my options.

Now for a brief overview of the three consultations I went on for anyone else who reads this on their quest to reading eye charts perfectly.

**All consults took about 2 hours and go through an assembly line of different machines to check everything about your eyes.

Dream caters to foreigners, so it was the first place that I went to.  My friend Casey went there last year for a consultation but never actually got the surgery because he was scared after being told his myopia (steepness of cornea) was too high. Turns out mine is even higher! The optometrist who helped me was wonderful, super sweet, spoke perfect English and explained everything she was doing the entire time.  It was very informative, so when I met with the doctor I felt like I had a good idea of what to expect.  I also really liked the doctor.  He told me that since my cornea is very thin, my astigmatism is super high, my myopia is very steep (not the steepest he’s seen, but still pretty steep), and my eyes are extremely dry, I’d have to have LASEK instead of LASIK done, which has a more painful and longer recovery time, but with less chance of complication.  He was also very honest and said that about 10% of people with my eye condition do sometimes regress in their vision after surgery, so there is a chance that my vision won’t stick to 20/20 afterwards.  It wouldn’t go back to my current vision, just wouldn’t be 20/20.  Also, given the thinness of my cornea, he said I would only be able to have the surgery once, without any chance of a touch-up surgery if I were to regress. After surgery, they would also make an eye serum from my blood that would help with the pain.  They also take a DNA swap prior to surgery to test for a gene that would make the surgery ineffective.

In the end, they quoted me at 1.8million won, and that’s down from 2.2million won for having a referral and if I write a testimonial.  I told them that I was going to sit on it and think because I wanted to weigh my options given the percentage for regression after surgery. So I left with a pamphlet with all my eye info to look over in a neat packet.

I read about this place on a few blogs so I made an appointment, but I’m not going to say much about this place because I couldn’t stand them. I felt extremely rushed, and about the only redeeming quality about them was the girl Chloe who was the English translator, and the prescription they wrote me for the artificial tears and special ointment I’d need to take for the scars that are on my cornea.  I knew I had to do this already so I took the prescription in preparation for my third consultation so I had a head start.  The optometrist got all huffy with me when I couldn’t accurately read the eye charts, and she was extremely short with me.  I basically got shoved into the doctor’s chair without even a hello, and then quickly ushered out without a goodbye.  I attributed it to the language barrier, but I think most doctors have a basic knowledge of English, especially one working in such an affluent area as Gangnam, so a hello and goodbye would have been nice. Then it was a back and forth between nurses who could mime things to me until Chloe came because they realized I actually had questions pertaining to a surgery. Duh.

I ended up leaving with a prescription for the artificial tears, ointment and a follow-up appointment that I intended on cancelling.  They didn’t give me any neat pamphlet with my eye results like Dream did, and I didn’t know who my doctor would be. They ended up quoting me at 1.5million won.

This was by far my favorite of the three, and I don’t think it was because it was the final one I went to.  I was referred by my friends Jeremy and 4names who both had their eyes done a while back with sparkling results. I made the appointment with the English speaking girl who works there named Yunmi, and she was SO accommodating and helpful. The first time I had actually called and they only spoke Korean so they had her call me back even though she wasn’t working, so when she called I was super confused how she had my number, but then it clicked. Anyways, I went in today, and right when I walked in she greeted me through the bustling waiting room and helped me fill out the medical form.  I then had an English speaking optometrist who did the most thorough eye exam of all three that I had been on.  I had told them about my previous Keratitis and they had the doctor check my eyes before they took the special measurement of my pupil to make sure I was bacteria free before moving forward. None of the others did that even though I had told them my history. After all the tests were over I met with the doctor again and also told him about the prescription I had begun taking.  He advised me to keep taking it, and take the ointment 2x a day instead of once because if the scars on my corneas don’t go away then I can’t have the surgery.  He also told me that I have about a 5% chance of regression if I have the surgery, and there is a possibility for a second surgery if regression does happen.  He broke down the numbers right in front of me too which was very reassuring.  Told me the thickness of my cornea, how much they take away, what it will be after, and so on.  So I made a follow-up appointment for Thursday to check my scars and hope for a big fat YES YOU CAN HAVE SURGERY.

Cross your fingers, toes and eyes for me pretty please with a big fat cherry on top with sprinkles! More to obviously come on this at a later date!

One thought on “My Quest To Rock The Eye Chart”