Unless you’ve been living under a rock, you’ve obviously heard that there’s been a bit of a ruckus going on over here on this tiny little peninsula in the far East for about the past month or so. While I deeply appreciate all of the concern that Mama Schaeff and all my friends have shown during these very trying times as I’ve been running to the corner mart scouring for the last package of ramen and kimchi and whatever bottles of water I can manage to hoist between my arm and bosom up the treacherous hill to my apartment….I AM FINE. WE ARE FINE.

I just thought I’d put this little piece of work together to reach all of you state side who only have the US media as a point of reference to where I am living and carrying on life as normal. I will admit, yes, I have had some nerves about it because who knows what the hell that fat fuck (pardon my French) will do in an effort to flex his barely-there muscles, and with little to know guidance or from what I’m sure, life/war experience.  I actually got my first ounce of fright last week at lunch when my co-teacher, Jin, told me that her mom was getting scared.  I think, at least for me, that bit of anxiety comes from just the fact that we really don’t know what he will do.  I read an article about the past and present young and reckless leaders of North Korea and when they rose to power.  I thought it to be a bit interesting, and frightening.  It’s like handing a kid a gun and telling him to just blindly shoot in the dark with Kim Jong Un.  Who knows what he’s capable of.

HOWEVER, since all this has gone down, I have pretty much scoured the interwebs and read everything and its mother about what in Gods graces is going on, but I am obviously by no means well-educated, just trying to stay as best informed as I can.  But, just on the basis that I am living here, and functioning, and carrying on life as I have for the past year and a half, nothing out of the normal has changed.  On that note, I’m really not scared in the least.  I don’t think that an attack on Seoul in going to happen.  An attack will probably happen, but that will probably be to an island.  In fact, just this afternoon while on my way down south after school, I snapped this shot of some soldiers riding the subway probably playing Anipang or some new stupid mobile phone game. 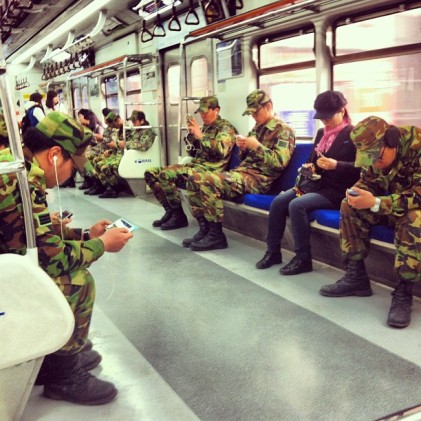 Keep in mind, I live pretty much as far north in Seoul as you can get and just about 4 hours ago, North Korea issued this very “legit advisory” notice to all foreigners (because we always listen to what North Korea says….).  These soldiers must be taking our well-being and their fellow brothers’ very seriously.  The very thought of every foreigner and every Korean storming Incheon or the KTX down to Busan to peace out to Japan makes me want to poke my eyeballs out.  As if I don’t get shoved enough on my daily morning commute.  Eeeep!!!

Until the US Embassy sends out something of more urgency than the following, I’ll continue on my merry little way.

A Security Message for U.S. Citizens

The U.S. Embassy informs U.S. citizens that despite current political tensions with North Korea there is no specific information to suggest there are imminent threats to U.S. citizens or facilities in the Republic of Korea (ROK).  The Embassy has not changed its security posture and we have not recommended that U.S. citizens who reside in, or plan to visit, the Republic of Korea take special security precautions at this time.  The U.S. Embassy takes as its highest priority the welfare of American citizens in Korea.  Should the security situation change, the Embassy will issue updated information.

We urge U.S. citizens to keep in regular contact with family and friends.  U.S. citizens living or traveling abroad are encouraged to enroll in the Department of State’s Smart Traveler Enrollment Program (STEP), to receive the latest travel updates and information and to obtain updated information on travel and security issues.

**Rest assured I am registered with the Embassy and they have all my contact information should I need to be evacuated.

Well, aside from calming your jets on the rising tensions that you’re all reading in the news, I thought I’d include some screenshots that I got a great giggle and smile in my heart from. I know you guys only care, but seriously, take a chill pill. But, and that’s a BIG but, know that I appreciate your love and concern for the schaeff schaeff ❤ 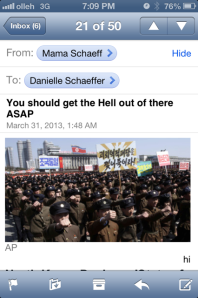 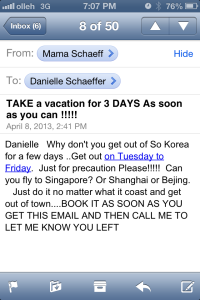 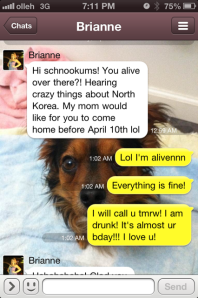 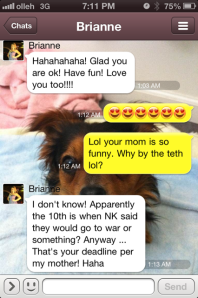 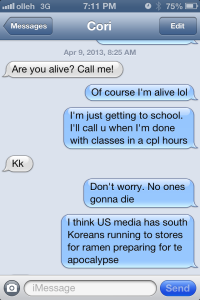 Well, for mine and my fellow peninsular comrade’s safety, I hope the big guy upstairs is just talking a big talk and we don’t get a special surprise tomorrow on April 10th. I would like to stay safe, not have to actually panic, buy ramen, flee to Japan for anything other than leisure, and I’d like the above Mama and lady loves who voiced their concerns to actually book the flights that they’ve been planning to.

Sending lots of kimchi kisses to everyone :*