I still remember the day my brother came home from the hospital. My mom was holding him and I ran over from my seat in the waiting room and he was in this red and black tie dyed tank top number.  He was so skinny yet chunky and teeny and had this jet black head of hair.  I was officially a big sister for the 2nd time that April 21st, 1988.

He probably looked something like this, with the addition of the tie dye. Mama Schaeff loved tie dye, and yes, I have the most bizarre memory. 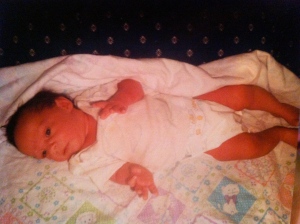 Then he grew up a little more, got cuter and learned where his feet were, like most babies do. 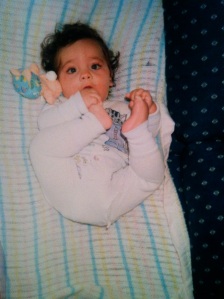 His hair and eyelashes also grew longer, and then the compliments came rolling in.  I still remember my mom getting compliment after compliment for my brothers eyelashes.  He was seriously the cutest baby with the biggest eyeballs in the world!! I meannnnn!!! Here he is with my mom’s dad, Grandpa Jack. 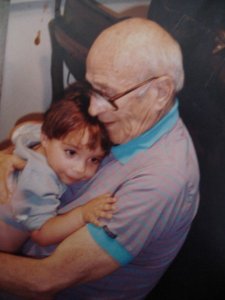 As he got older, and by older I mean like, in kindergarten, he learned what *bad words* were. That’s when I learned that soap and Tabasco sauce were used for things other than washing your hands or flavoring your food.

There are also a couple memories of Michael that still to this day crack me up to TEARS, and I do mean literal CRYING OF LAUGHTER TEARS.

1.  Strawberry Jacuzzi.  I had a massive crush on this guy Sahand in 7th grade, like, it bordered on obsession. Anyways, one summer day my mom drove me, my sister, Cori and Michael to Sahand’s house (to stalk him? I don’t know?) I was wearing a forest green Yosemite tank top and Birkenstocks.  I remember that.  And my brother did this crazy full body convulsion dance while blaring “WHOAAA STRAWBERRY JACUZZI! WHOAAA!” just like Kel does in Good Burger. He would continuously do the Strawberry Jacuzzi whenever he’d watch Kenan and Kel, and still to this day Cori and I die of laughter and still talk about THE Strawberry Jacuzzi.  It never goes out of style.

2. YA-YA-YU-YUHHH. Back in 8th grade I got my first computer.  It was a Dell, because that’s what everyone had.  They came fully equipped with a detachable microphone to record all the gems you saw fit. Well, I came home one day with Cori, plopped down at my computer to probably do one of those sUrVeYs or something, and found a voice recording on my desktop.  Naturally we clicked on it.  It was of my brother, and it started out really slowly of him singing what we believed to be “Hallelujah” but sounded more like “yayayuyuh”. Well, it was slow and almost a whisper in the beginning, and as it progressed on it got higher and higher and higher and as it ultimately reached the power crescendo, he burst into this MAGICAL rendition of “YA-YA-YU-YUHHHHHH”. It went on for maybe 5 minutes and Cori and I were crying and peeing in our pants at the same time. Yet again, we still talk about YAYAYUYUH. YAYAfreakinYUYUH!

I will say Michael and I have not always gotten along or had the best relationship, but I have only been blessed with one little brother, and despite everything, I love him with all my heart plus more.  He’s a nut ball, but who isn’t a little whack in the noggin these days? And there are two big things I can thank him for introducing into my life ~ *NSYNC and Britney Spears.  If it wasn’t for him bringing a couple of their CDs on a cruise to Hawaii, I may have remained in the dark for a little while longer.

Now for a little time travel just because 🙂

Here I am with him while he looked like the Marshmallow Man from Ghostbusters had a baby with a mad scientist. 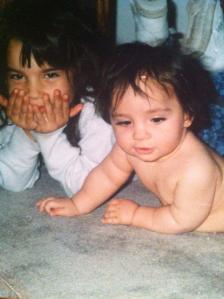 Thanksgiving one year with Grandma Lucy.  Mikey decided to give the fagala hand. 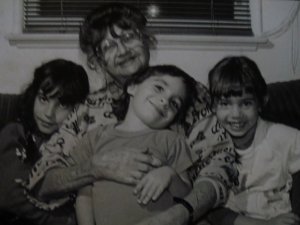 We went on a family trip to Washington D.C. and obviously posed with The Acorn like all those from Agoura did.  Duh! Can you believe this only won us Honorable Mention?! 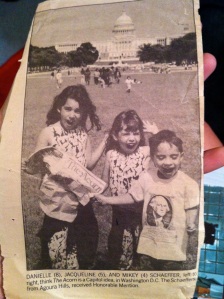 This photo captures the 3 of us TO A TEE. 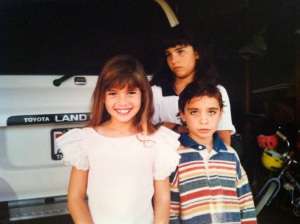 We went to Israel for my Bat Mitzvah and sat on this camel posing with this Arab.  On this trip, Michael spit in a boy’s face, and laughed at me (with Jacquie) when I couldn’t accurately read my Torah portion swiftly enough.  Neither of them had a Bar or Bat Mitzvah, thus making them still children. 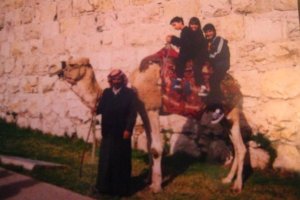 Flash forward a few years while I’m in college at UCSB and Michael is in high school. He came up for a very famous Halloween in Santa Barbara.  He got drunk for his first time, did his first beer bong and then got lost with a bunch of men dressed up as Playboy Bunnies.  Then he made this face. 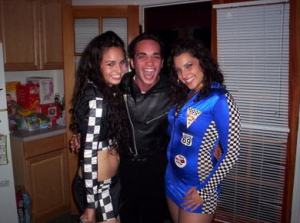 Jacquie and I played *Best Sisters in the World* for the evening and took him to see Britney Spears on his birthday.  We came home with this photo with “her”. 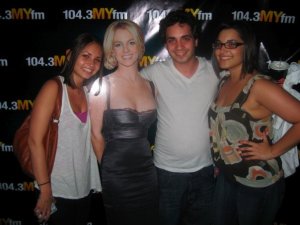 I eventually moved across the world, and we all cried at the airport and looked like sloppy Rudolph’s. 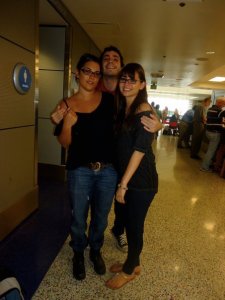 Then I came home for a visit, and when I left for Korea again, the airport security man took this awesomely flattering and exquisite photo of us and Papa Schaeff. 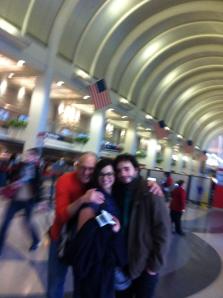 Well, Brotha Schaeff, I love you.  I hope you stay out of trouble, keep ‘bows in check and that all of your teams have pristine records this year so you don’t fly off the handle! I know we don’t always get along, but know that you’re always in my heart and I love you more than anything and would do anything for you in the blink of an eye. So, keep it in line and don’t scare those puppies, mom, dad or Jacquie. Love you, crazy face! Mwah!