I can’t believe I am even writing this post.  It actually pisses me off that I’m making myself do this.  However, I’ve come to use this blog space of mine to pay a little love to the people near and far who I want to give a big virtual hug to no matter where we both reside in the world at any present moment at any present time on any day of dire significance.

This one is dedicated to my beautiful Stephanie Anne Heyduck, who has become one of the nearest and dearest to my heart during this last year and a half in Korea.  It makes me really sad that her time here has expired, but that’s what comes with the expat territory.  Those who we become so close with weave in and out of our lives and that’s that.  I guess it’s what we indirectly signed up for in choosing a lifestyle fueled by wanderlust; bonding together with others who also thrive on that same passion to wander and move about this glorious globe to explore and conquer.

As we’ve cuddled, danced and traveled our way through an ever-growing friendship, it’s always been apparent to me that Steph is totally one of those people who is unbelievably wise beyond her 25 years.   Whether it be in matters of the heart or the world, she always manages to have the wild child in check with the mature adult who’s got their head screwed on straight.   She’s also one of those people that just knows something about everything, no matter the topic.  I only know a few of those kinds of people and she’s one of them.  It always kind of amazes me and I’m just like WHA?!  Where you come from?!  She’s a special one, and I love her dearly.

The first time I met Steph was when Jeanette and Carmen were visiting.  It was maybe my 3rd week living in Seoul, and Jeanette and Steph realized they had practically matching tattoos.  Friends.Seoulmates.WHAT.

Here’s the first time Steph, Katie, Abby and I officially became a foursome after each others hearts.  We hiked to the top of Namsan Tower and then struggled to take this photo in the geographical center of Seoul! Many of my “I’m so happy I’m in Korea moments” have been spent with these ladies, and they’ll all always hold one of the most special places in my little Korean heart.

She introduced me to one of my favorite Korean foods, Shabu Shabu, in the Ying Yang pot, one freezing cold night after shopping our butts off in Myeong-dong. Nom.

We’ve had some shenanigans, and this was one random night out on the town while everyone else got down on a bus filled with soju.  Hey, we all make mistakes. She dragged me, she loves me despite it 😉

We got money hungry at the Trick Eye Museum. AKA the most fun museum EVER! 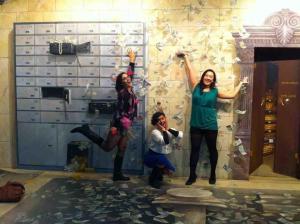 Then we got ballsy and decided to eat some live octopus together for the first time.  Actually not so bad and kinda fun.

Somewhere around this time we decided we’d bare it all and get naked with each other at the jjimjilbang.  We did, and it was weird for like 2 minutes, and then it was awesome, and then we went again, and we became obsessed even though we didn’t do it as often as we thought we would.  But still.  It brought us as close as 2 naked platonic girlfriends can get.  Both in and outside of our sexy jjimjilbang attire.

Her family came to visit, got us smashed to pieces during her mom’s first date with soju, and then Papa Heyduck did a sorority pose in this photo with us all.

There were a couple girls nights in.  This may have been what they started out looking like.

And then the aftermath to the tune of some Disney movies and Twilight and makkoli and soju.

Then we took on a bit of traveling together.  First came that unforgettable typhoon of a trip to Japan where we rode bikes around Kyoto…

Got our plans “horribly” rearranged by an unexpected typhoon…

And then relocated ourselves to the nearest karaoke room where Steph gave us this private show (before I inevitably hogged the mic).  Adele or Celine perhaps? The sake won’t allow me to remember.  Whatever the song, her voice sang it magically.  From this moment on we became noraebang obsessed.

Shortly after, we went to go Barack the vote together.  We were VERY excited to make our voices heard.

And after he won the election, the two of us rented out the VIP room at a local noraebang in Itaewon (because it was the only one available), drank ourselves silly on a Wednesday night, and sang our Disney hearts wild for 2 hours because we were so happy for our man Barry.  One of my all time fave Steph & Dani moments to date. “I can show you the worldddddddd……”

Of course by far one of my favorite things everrrrr that we’ve done was going to Thailand and Laos together this past February.  You don’t really know someone til you either live or travel with them, and we traveled really really well together.  We had such an amazing time playing with elephants and tigers, cooking exotic cuisine, crossing the border like a coupla Mexican cholas in the back of one too many pick-up trucks, and meeting lovely French lassies and gorgeous Argentinian men along the way. (I have majorly slacked in posting about that trip, but it will be coming soon, I promise. Eeeep!)

Needless to say, friendship is nothin if you’re not there to help hoist your friend’s fat ass up on top of a hormonal elephant… 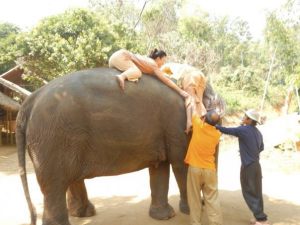 Or sit down next to each other in some tiger pee to get those one-in-a-million shots in life! 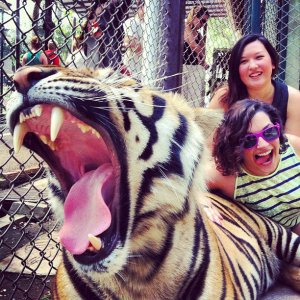 Tonight after Abby and I had to fight back premature tears while saying bye to Steph at our 2nd to last dinner together, we were talking about when we first signed up to move our lives to Korea.  We had envisioned living amongst a new culture, with new foods, new experiences, new travels, a new language to make up the white noise in our background, and we knew we’d make friends abroad.  But, we both made the connection that neither of us had really put much thought into the relationships we were going to build and who would soon become our family whilst carrying on our new lives.  I guess you don’t really plan or think about those types of things because they’re organic and happen as they will. With the ending of year one a slew of great loves left, but Stephanie is my first great girlfriend who’s been there since the beginning, to leave Korea, and that’s a killer. Great girlfriends are not easy to find, and she is just one of those friends that I am so lucky to have snatched up.

To wrap it all up, I love you Stepaneeeeee, and I’m gonna miss you, like, times 10 million to the max.  But, I know we are both wanderers and this is just a BIG “see ya later”.  My time spent in Korea would never have been quite the same without you in it, and I hope this next chapter of your life is a lot less (kimchi) smelly, but just as fulfilling as the past 2 years have been.  I love you to infinity and beyondddddddd.