After a waterworks show on the way to the airport, at the airport, and on the plane, I have arrived in the hot box sauna that is S. Korea. I am not over exaggerating when I say it feels like living in a sauna 24/7. It is so humid and muggy!!! My hair is definitely going to love it here. Anyways, I got here safe and sound and am staying at Kyung Hee University until August 24th for orientation.  I wanna say my flight was under 12 hours.  I also highly recommend Asiana Airlines if you come visit me because it was so great.  The flight attendants are so attentive and walked by like every 5 minutes with drinks for you, and then the coach seats are SO ridiculously roomy.  The food wasn’t too shabby either.  I passed the time quite quickly by catching up on lots of movies.  I started my journey with a 23 minute bio/interview short about Justin Timberlake.  I really needed something to bring me out of my waterworks funk, and his face sure did it. I then proceeded to watch Water for Elephants (yay), Soul Surfer (Kevin Sorbo/Hercules is in that. So weird that I ran into him at the Apple store a week or so ago), and Date Night (I think Steve Carell and Tina Fey should date after seeing this…). End of story, it was a lovely flight and I made a cute little Korean guy friend wearing skinny jeans on the flight who helped me with my heaping amounts of luggage. I have never traveled so heavy in my life, and I must say it’s really annoying.

Here’s a little recap about orientation so far. After wandering through the airport aimlessly, I was picked up along with a bunch of others from Incheon Airport by EPIK and drove for about 1-1.5 hours to our orientation site at Kyung Hee University in Suwon. We got here and found out that the boys are in dorms in a separate building than the girls. I don’t even think it was that segregated when I went to Washington DC in 8th grade. We also have a curfew of midnight during orientation and no alcohol is allowed in the dorms. I should just throw away my ID right now. Ahhhhh. ANYWAYS, we shlep our luggage off the bus at our designated buildings and then all shuffle into the Multimedia building where we found out our groups and got our name tags, keys to our rooms and met our roommates (mine is named Tracy), get a sweet orientation textbook that is huge, a few towels with the EPIK logo, an EPIK pen and alarm clock, 2 rolls of toilet paper, an adapter, a bar of soap, an EPIK t-shirt and a bottle of water which we are then told we cannot drink because we have medical checks in the morning so we can’t eat or drink. AWESOME! We then proceeded to shlep our bags up to our rooms where we are finally obliged with a shower, which was magnificent. The shower, as you can see in the pic below is the entire bathroom and I think it’s so fun!! You can shower and clean your bathroom at the same time, but don’t leave your shit out or it’ll all get wet!  The beds are also hard as a rock, and we were provided two comforters, one to sleep on and one to cover.  Of course there isn’t a fitted sheet, and if you know me, you know I then wake up on a bare mattress because I sleep like a tornado. Here are some pics of the dorm room to tickle your eyes. Don’t mind the mess.

The next day I had to be at my medical check at 9am.  Of course we were all starving because most of us hadn’t eaten since about 5:30pm or so the day before on our flights. The medical check consisted of a urine sample, which many had trouble with seeing as we couldn’t even drink water before, measurements of height and weight, an eye exam which I think I failed, getting 4 freakin vials of blood drawn (I still have a little bruise), a “q&a” about your health with the dr. and finally a chest x-ray, where all the girls had to change into a sexy pinkish frock which was awful in the heat. It took about 2 hours or so to complete, and then we were finally rewarded with a box of orange drink (yes, drink) and this delicious french pastry/peanut buttery/scone thing. Nomz.

After the exam we got to head on over to lunch, which was meh.  Meals here typically consist of iceberg salad with some sort of trying-to-be-Americanized dressing which is usually pretty good, some sort of gross pork dish which I stay away from, maybe an egg dish, maybe some fried chicken or bulgogi, some type of noodle, I think vermicelli usually which are pretty good, rice, french fries (!!!), some sort of soup which is usually in a fishy broth (ick), always kimchi, and watered down coffee in the tiniest cups ever.  I can’t wait to get out into the real world here and eat food!!  Here’s a picture of some food, I think this was our first lunch meal.  Meet some of my friends, Jason and Katie.  He hasn’t eaten his food because he talks too much. 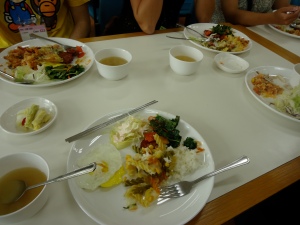 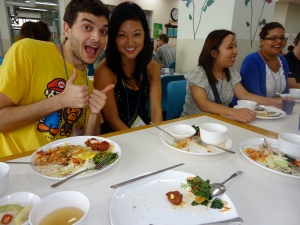 After eating we had our EPIK/SMOE welcome ceremony and overview where we went over basics of the program, contract, vacation days, etc. and we watched these high schools boys play a traditional drum song, the name of which is slipping my mind.  It was actually really cool, and those kids got SO into it, and their bowl cuts were whacking like crazy!

The rest of the day was pretty open for us to hang and do whatever.  We had dinner and then a group of us ventured out of this university bubble that we have been cooped up in.  We went out into the city of Suwon and the lights are SO BRIGHT!!!

We walked all the way to HomePlus, which Canadians were comparing to Walmart, but I didn’t see any of “those people” wandering the halls.  This place is so awesome and bustling still at 9pm.  It’s like 3 floors of awesomeness.  Restaurants on the 1st floor, grocery store/department type store on the 2nd floor and then electronics and clothes on the 3rd floor.  It was pretty awesome and we bought bottles of soju for 910 won, which is under $1! It’s also legal to walk around and drink outside in public, so we sat outside of HomePlus for a little bit and tried our soju, which tastes pretty much like a watered down vodka.  We then ventured to FamilyMart, which is sort of like a 7-11 and they have tables and chairs outside for you to sit, talk and imbibe.  It was really cool, but I was so exhausted and I swear I had the eyes-are-closing-jolt a few times. Hello jetlag! Anyways, here are some pictorals of things I thought were cool on our journey through Suwon and HomePlus. 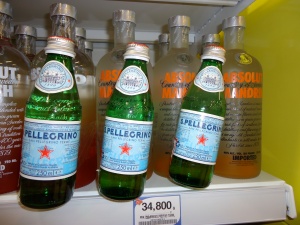 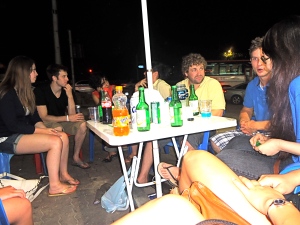 Today was a jam packed exhausting day.  We had lots of classes about how to teach secondary levels (middle school/high school), how to create lesson plans, how to make English more comprehensible by Korean students, which was super interesting, and then Korean class tonight. I was so tired by the time we got to Korean class.  All the other classes were almost 2 hours, and Korean class was about an hour. Maybe I’ll Skype with someone soon and practice my Korean – an-nyung-ha-se-yo (that means hello). I also found out that I will be teaching Elementary school!  Yay for little kids!! Now I’m back at the dorm and ready to konk out at 10:30pm. There is a full day of classes tomorrow in true Korean fashion, so I will leave you with this happy t-shirt from HomePlus modeled by my new Canadian friend Matt. 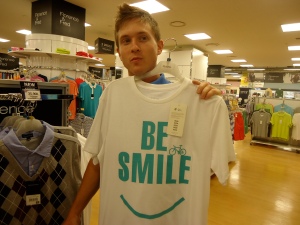 5 thoughts on “I have arrived and am getting ORIENTed.”