As many know, when I first landed in Madrid and was on the apartment hunt, it was exhausting and stressful and annoying all rolled into one pretty little ball of yuck. I saw so many dumps, was put on so many long lists of others in my same boat, and then after a little over 2 full weeks of searching, found a place. I sat and talked with the guy, who we will call The Dictator, for an entire hour and totally hit it off. The room was massive and complete with a balcony and azulejo tiled floor. I was obsessed, and an hour later told him I wanted to live there if he’d have me.

Oh he had me alright.

At first he was so nice, and even invited me to go watch a movie with his “cousin” and a friend. I had other plans, and frankly didn’t want to go, but still thought it was a nice gesture. This my friends is all building up the facade.

Then Mama Schaeff came to visit a couple weeks after I moved in, and naturally I was excited to have a visitor stay with me. The night before she arrived we actually had a roomie dinner because it was my Belgian roommate, Lorenzo’s, birthday, so he cooked for everyone. I casually told The Dictator that my mom was coming the next day and he put on this smile like “Oh that’s great!”

During her whole stay she felt uncomfortable. The apartment is constantly kept dark, and she just didn’t feel a very welcoming atmosphere from the place. Which I don’t blame her. However, we were never home during her visit, except for during intermittent fights and to sleep. Then the morning that she left, I got a text message from The Dictator asking me when she was leaving and telling me that “it’s normal for visitors to only stay for a weekend”. Excuse me but no. Not when they are flying around the globe it’s not normal. This was the first WTF in a long list. 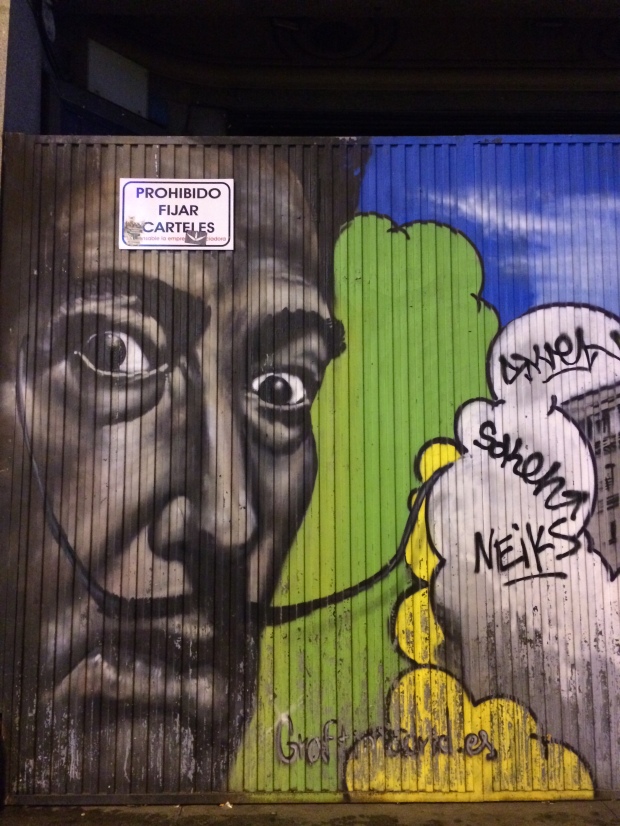 Even Dali thinks this is weird.

Then my friend Kristia was over one Friday or Saturday night. We were hanging out in my room, talking and drinking some delicious vino because that’s what social people do. They talk and utilize spaces that are theirs. At 11pm on the dot I got a text message (note that it’s always via text), saying that my visitor had to leave now. Um, last I checked I am a grown ass woman, paying rent to live in my grown ass woman room, so as long as I’m not disrupting your life or your property I think I am allowed to have visitors. And also, last I checked I already have a father, and he wouldn’t even tell me to have my visitor leave. I wanted to stay and spite him, but I hadn’t reached the point of revenge seeking just yet. So we left.

This happened a couple more times, and each time pushed one more button towards hatred of The Dictator.

Along the way there were also little things. Like notes on the chalkboard in the kitchen saying not to open the kitchen window, or that the water and light bills were too high, which made absolutely zero sense to me, since we basically live in a dungeon where lights are forbidden. And as for the water bill, I obey the once a week laundry rule, doing mine about every 2 weeks. Meanwhile, I constantly see their fresh laundry hanging to dry almost everyday. To top it off, remember that “cousin” I mentioned up above? Well, The Dictator and his “cousin” share a bedroom, which was not disclosed to me upon renting, and frankly, it’s bizarre that two 40 year old male cousins would share a bedroom. I had a sneaking suspicion that the “cousin” was a cover for boyfriend, which has since been confirmed by a prior tenant.  That aside, I was told there were 4 tenants, which I soon realized was 5. Oh, and we aren’t allowed to have boyfriends or girlfriends spend the night, as was told (via text) to my Belgian roommate at 11pm one night while his girlfriend was over. Enter the double standard.

With the “no significant others” rule, and quickly becoming clearer, no visitors rule tucked in my back pocket, I alerted The Dictator the day before L was to arrive in Madrid. Shocked, but not quite shocked at all, I received several rude texts in a row saying that no visitors were allowed to stay over, and that my mom had previously stayed too long. EXCUUUUSE ME, but 1) who says that about someone’s visiting mother? And 2) when I first rented this apartment that was the first question I asked you and got a resounding “Of course visitors can stay! As long as they sleep in your room!” So sorry, but that is not flying.

He eventually bent, but for a hefty price of 20 euros/night per visitor. Preposterous. I came back to him with a counter offer based off what another friend’s landlord charges non-family member visitors. He told me to get a hotel for that price. I of course didn’t listen and L stayed over for the weekend, and I pushed him to not pay one cent out of principle.

During his entire stay we felt like we were being sneaky and tip-toeing around. Which forgive me if I’m wrong, but that is no way to live in your own home, except if you’re 16 years old and under your parent’s roof. Well, L left on a Monday morning, and on Wednesday late night Jeanette arrived, and without a mere peep to The Dictator. I thought I could be clever by sneaking her in late and he wouldn’t notice. But he would. More on that in a bit. 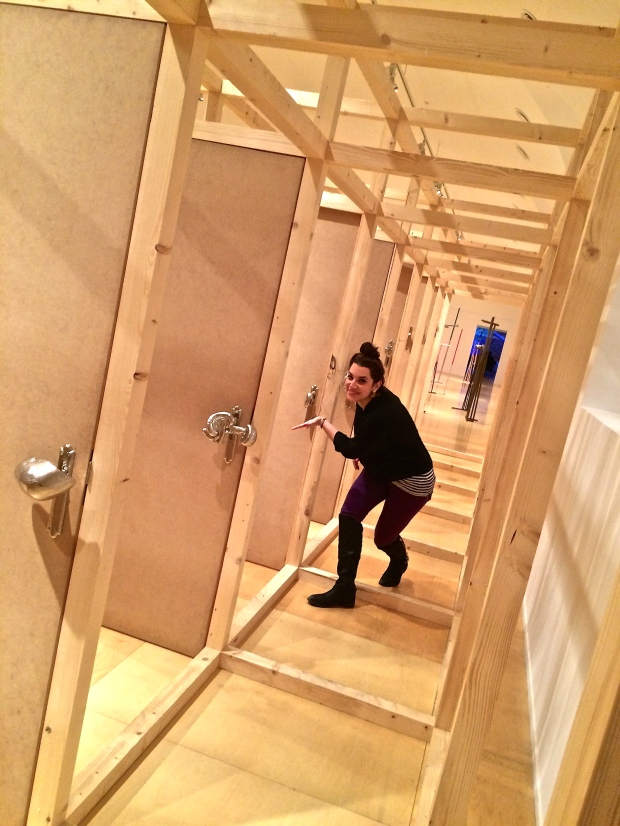 Here I am tip toeing through an art installation.

On Thursday morning I got a text message from The Dictator saying “your friend is in the house”. No shit. He said (didn’t ask) you didn’t tell me this, and it’s not allowed. With every message he would send he would nip it abruptly, leaving it like that was the end of that and he has the final word. No no, sir. That is not how the world works. So I told him we are going out of town, so you won’t have to worry about losing your precious bathroom time, or whatever it is you’re so concerned with.

So we went out of town for 4 glorious days for the puente (long weekend). We got back late Monday night and Jeanette was leaving Wednesday morning. Well, Tuesday during my 2nd period class I clicked on my phone to check the time, and what do ya know? There was a string of nipped in the bud texts to me telling me “your friend is in the house” and that I’m not good to co-habitate with. Then the kicker……. I have 22 days and I’m out. I GOT KICKED OUT OF AN APARTMENT. It’s almost comical.

I didn’t respond to any of his nonsense, and then late that night, while Jeanette was using his precious shower water, he came and knocked on my door to just speak at me in Spanish and reiterate his text messages. I of course have a big mouth and I love to use it, and that I did by talking over him in English.  I told him that he’s a liar, and that I won’t listen to him because he went back on his word. I asked him how it affects HIM if MY visitor is in MY room, sleeping in MY bed, and occupying MY space? His response (in Spanish and ultimately in English when he realized I wasn’t going to shut up) “I need to use the bathroom!!!” Oh, you’re a big boy. You can hold your pee 2 minutes so my friend can shower. He also scolded me for turning on the lights so that we could see when we walk. Pardon me for wanting to use one of my vital senses in my own home. Not to mention, it’s also freezing because they don’t turn the heat on, so I sleep bundled up.

Flash forward to a couple days later as I’m perusing Idealista.com, the website used to look for apartments in Spain. I saw my room pop up and immediately posted it to our Auxiliares Facebook group to warn people not to rent from him. This proved to be the greatest way I could have ever used the fabulous internet to my advantage. Not 1 or 2, but 4 people chimed in who were previous tenants or had a friend who was, and EVERY SINGLE PERSON was either evicted after a couple months for having visitors, or had to get the cops involved because The Dictator tried to spin the situation. Nearly everyone was jipped out of their deposit, and everyone said this guy is a psycho. Oh, and remember how I said that I thought I was being clever sneaking Jeanette in late night? Well, one of the previous tenants alerted me that there is in fact a camera/motion sensor in the main hallway of the apartment. Yes, you read that correctly. There is a CAMERA IN MY APARTMENT. Specifically used to track comings and goings of visitors.

So naturally I went out to the hallway to look for it, and low and behold, high above there is a damn camera, and right when I get in shot a red light flashes. I also found some other suspicious wirings in the hallway, but I’m not sure what they are. Did a full sweep of my room and bathroom and kitchen, but thankfully haven’t found anything else. Needless to say, I feel extremely creeped out in my home now, and I’m pretty sure that is some illegal shit, especially if not disclosed prior to renting.

And there you have the apartment hunting and living nightmare that has landed in my lap wrapped in a pretty poopy brown bow. Many people who haven’t moved abroad don’t always take into account the real life things that go into the everyday, and finding a home is one of those huge things. It takes a lot of stepping out of yourself before getting to enjoy your new city, to get the answers you need when you speak a different language from someone. This has now happened in 2 instances, in Korea and now here. I have found out how easy it is to get taken advantage of as a foreigner in a situation like this. When it comes down to it, people basically suck and are money hungry and will exploit all they can to get what they want.

And you know what? THEY CAN SUCK IT. 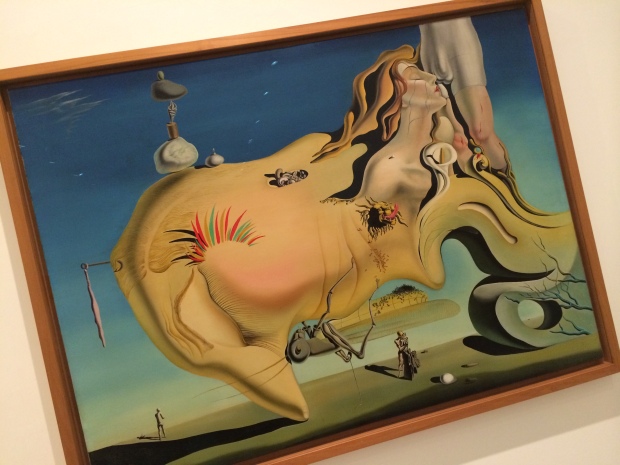 Now you tell me! Have you ever had a horrendous living situation abroad? A psycho landlord? A person who literally chills you to the bone that you have to coexist with? Let me know all about it so we can bond over the nut jobs of the world.