I was sitting with Jeewon, Tim and Andria Friday night at a failed evening of watching Reservoir Dogs on the rooftop at Platoon in Gangnam, and somehow my still (almost 2 months later) sprained ankle came up.  Then I got to pondering all my epic falls since coming to Korea.  I mean, if anyone knows me you know I’m a klutz, but ever since coming to this country I seem to have forgotten how to put one foot in front of the other.  It’s a bit absurd, I’m the first to admit.

Well, I made a tiny list of some of my goodies so they’ll never ever be forgotten once the bones heal and the bruises fade.

While still learning how to walk on snow and ice, I had quite a few tumbles that first winter. Many of them were in the Family Mart right by my school.  And many came back to back, as in right after I got up I fell back down again, and took down a few bags of chips with me. Actually, I could probably tack on a few more falls to that number up there, but we’ll just keep it at ~6 for my own sanity.

Remarkably, this past winter I don’t recall falling in the snow.  Job well done, me.

7. Japanese Karaoke Room during a typhoon

During a typhooning evening in Kyoto, Japan,  30 bottles of sake took over a karaoke room.  Somewhere between not all of it making it into the appropriate glasses, and my own sheer excitement over singing the next Celine Dion or Disney tune, I collided with a puddle of sake on the ground and nearly broke my hand.  It didn’t feel right for a good month afterwards, but somehow it healed itself, and Japan will go down as how I came to be Noraebang obsessed.

This is easy.  I hadn’t legit roller skated in a really long time and someone had extra WD40’d those roller skates because were really slippery.  It was a given that I was going to plummet either face first or tuchous first. Thank heavens I’ve been blessed with a padded posterior.

2 weekends ago was Buddha’s Birthday so we had a 3 day weekend.  Andria and I decided we wanted to breathe some fresh air, so we headed out of Seoul and up to Paju, about 45 minutes away by bus, and about a hop, skip and a jump from the North Korean barbed wire border. Despite the locale, it’s a really cute little town with lots of coffee shops and random little art and chatchky galleries that we were excited to take advantage of.

But that’s besides my point right now.

Before I even stepped foot in Hyeri, the area of Paju that we were going to, my fun had already begun!

As I was swiping my T-Money card to get off the bus, I somehow missed the middle step in my footing, and in a nanosecond my whole body went repelling downwards.  I was caught somewhere between a lunge and a split from the top to the bottom step, and GOD BLESS my cat like reflexes, because if I hadn’t jut my arms all the way up and back to grab those metal bars I surely would have eaten that pavement and my teeth straight off the bus. My wallet went flying back and all I could scream to Andria was “SWIPE MY CARD!” Heaven forbid I get charged an extra 2,000won on the return having not swiped out on this journey!

Shockingly, the whole bus of Koreans let out gasps of horror, which is quite unusual, as people are so mum here and usually have nothing to do with people when something horrific or embarrassing happens on any mode of public transport. Anyways, I hoisted my lame body up and *gracefully* moved out of the way of the bus, let out a few cryscreams at the side of the rode as I held my aching knees, and checked to see if my tights had ripped (they hadn’t). Then I let out the heartiest laugh.  OF COURSE I FELL OFF A BUS.

This is what my left leg looked like the next day.  BATTLE WOUNDS.

Fallin’ all over the world since this epic fall at the Colosseum of Rome in 2006. 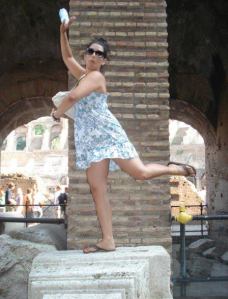