When I was a wee lass, every Passover Papa Schaeff rented The Ten Commandments with Charleton Heston as Moses.  I looked forward to eating matzah ball soup and latkes from Agoura Deli and watching it every year like a huge nerd, but whatever. I loved it.

SO, imagine the thoughts bolting through my head when I knew I could have my very own chance of seeing a real life sea part before my very eyes…AND ON PASSOVER nonetheless! MIND BLOWN. This is how my little Jewish girl dream of seeing a sea part came true (even if it didn’t look the way Hollywood in the 1960s depicted it).

This past weekend I went down to Jindo in the very south of Korea for a sea parting festival that happens twice a year for about an hour, and goes hand in hand with its own Moses story.

A Jindo village was attacked by tigers and all the villagers ran to Modo island for shelter. All, except for a helpless old woman who was left behind, out of despair she prayed to the Sea God, who split the sea and helped her escape the blood thirsty animals.

I read about it before coming and had it on my list of must-dos, but didn’t realize it was this weekend til my friend Jeremy said he wanted to go.  Of course my little Jew girl excitement hijacked the trip and we made plans and went down therrrrr together with his overactive bladder and a couple other homies. It was an organized tour led by this guy who takes people on hiking trips all over South Korea, so everything was set up as best as this one little man was capable of.

The bus ride down there started at 7:20am and took about 7 hours, AKA lots of sleep time / now needing an elbow in my neck and shoulders.  We got down there probably around 3pm, checked into our pension where we made the wise decision to migrate from the room we initially chose with a bunch of loud-mouthed, underpants-only-wearing people to another room with some Texans and a British lass, and of course our token saucy ginger 4names.

We suited up in these sexy florescent orange fisherman boots to our thighs and made our way to the parting sea en route to the promised land of milk & honey…. in Korea.  There we saw ajummas digging for dinner and all their spawn assisting.  We didn’t see as much sea life and pretty seashells as we thought we would (except for the smiling starfish), but it was still a trip to see water on either side of you, and then watch the tides come in later when we were walking back.  To celebrate before being washed away, we drank some makkoli in the center of the sea and paid our respects to Moses.  It was pretty cool, and quite the Passover miracle if I ever knew one! Don’t think a Jew has literally spent Passover at a parting sea since like, Moses led us out of Egypt. Ch ch check it outskies…… 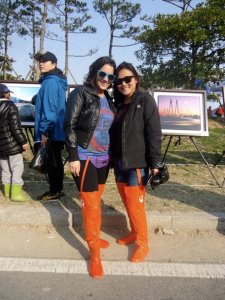 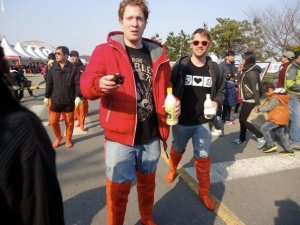 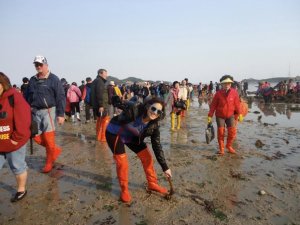 My attempt at finding a walking stick to be truly authentic. Fail. 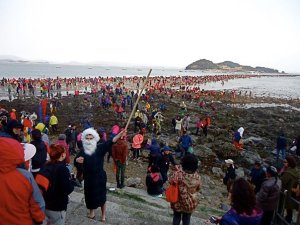 History is all wrong. We escaped Korea, not Egypt! 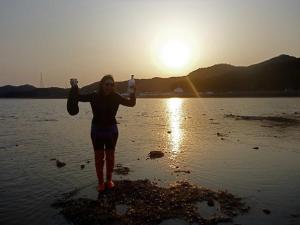 Jeremy, moi and Heather with the lady, the tiger and some delicious celebratory makkoli.

We also stopped off to see a Jindo dog show and pet some of the gorgeous pups, which are considered a national treasure of Korea.  They are ADORABLE and I wanted to steal all of them. 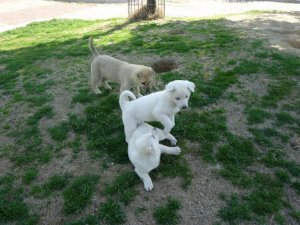 Aaaaand Spring has hit the South!  We went on a lil hike but mostly basked in the gorgeous sun, on a rock, beside the sea for a few hours. Twas heavenly, and I got some of my sun-kissed glow back.  I think this fool got burnt tho. 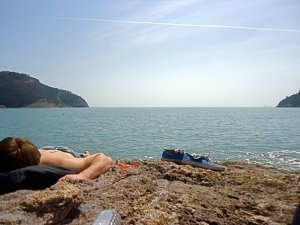 All in all, I think I’ve begun satisfying my get-out-of-Seoul-and-explore-Korea-now goal quite swimmingly.