So I was a huge fatass this past weekend and I thought I’d share that with all of you. The food was just that good that I felt I needed to urgently (or not so urgently since I saved this as a draft and am just now getting to posting it) report back about my indulgent weekend. Nom nom nom bitches.

This past week was Canadian Thanksgiving, and as many of you know I have met an over-abundance of Canadians in the past 2 months.  And I am of course thankful for them because they are the freakin nicest people ever. No joke! This was the 2nd Thanksgiving dinner that another group of friends of friends had this week, so of course when the invitation was extended to the American, I came.  I love food and good company and any excuse to gather with people for the holidays.  Plus, I’ve been feeling like crap for the past few weekends, and being all the way out in f’ing Dontgogay, I’ve been feeling a wee bit of anti-social Danielle creeping in. To top it off it was pouring rain on Saturday with thunder and lightening, the whole shebang. Anyways, after not going to the Expat Festival I decided to pack a bag and make the hour trek in the rain to Canadian Thanksgiving in Hae Bon Chong (HBC). There was mashed potatoes, gravy, sweet potatoes, broccoli and cheese, rice, squash, stuffing, cranberry sauce, pumpkin pie and cheesecake and some chicken filling in for the turkeybird. Not to mention, lots of wine, something I haven’t had much of since arriving.  I never see it, and if you do it’s really expensive.  Hell, a $5 bottle of Yellowtail at home apparently costs $20 here!

All in all, twas delectable and just what I needed.  It just reminded me that my absolute favorite time of the year is finally upon us.  It also made me think of how much I miss all my friends from home and that I won’t be spending the holidays with them this year 😦 Needless to say, it was really nice to be in a warm apartment with a bunch of people cooking, drinking and just enjoying each others company. I couldn’t help but reminisce and get a little homesick for all of my friends.  I miss weekend and holiday brunches at Club Charnock and KP Hizzy.   Love you guys. 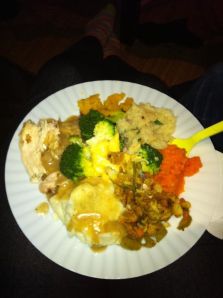 That night was the celebration of 2 of my friend’s births.  My Aussie friend Jason and my precious plane buddy Casey.  It was at a freakin flashy club called Eden.  Apparently it’s the top 7 club in Seoul.  Whatever.  Anyways, Abby and I carted our bloated and scantily-clad selves all the way to the Ritz Carlton in Gangnam for the flashy affair.  The club was nothing spectacular to me, but twas a birthday and we had fun. We watched our friends spend a lot of money for a table, fended off handsy Koreans and then watched a sea of Koreans stand and video tape the apparent celebrity DJ, instead of dancing to the music.  Interesting experience to say the least.

Back to the food.  Abby and I headed back to the HBC after Eden, but made a pit stop in Itaewon for a monster Egyptian sandwich.  It was not necessary but our taste buds really wanted it, so we indulged.  It’s basically a kabob on a roll.  Chicken or beef, onions, delicious sauce and who knows what else.  Here’s the fat happy man preparing our 3am meal on the side of the street.

Abby and I cuddled that night until my alarm startled us both in the morning beckoning me to rise and make my way to my temple food date with the music teacher from my school.  Her name is Choi Jung Soon and she is so sweet. She is taking me under her wing to teach me about Korean culture, and in return I’m going to help her with her English (which is already so good!) and help her read Mary Poppins, and also teach her how to make latkes.

I briskly made my way through the 3 subway transfers from HBC to where the temple was near Insadong, which is a very holy area in Seoul.  The temple we went to, the name which is slipping me, is the most famous Buddhist temple in Seoul.  Across from the temple is a Buddhist center and on the 5th floor there is a restaurant serving temple food, which essentially is delicious vegetarian food.  The Schaeff fam would enjoy this! I ended up arriving about 15 minutes late after getting slightly lost, but it wasn’t all my fault!  She apologized to me because she gave me incorrect directions after coming out of the subway station.  Nonetheless, we found each other, and I plopped off my backpack and sat against a wall because my whole back was sweating like a disgusting man.  I debated ducking into a bathroom somewhere to change to my top from the night before because I felt so gross and sweaty.  It went from thunder, lightning one day to scorching hot the next.  I did not pack appropriately! Whoa is me! I decided to suck it up and let my back dry through lunch lol. Sexy, I know.  From gross to delicious (pardon me), check out some of the delicious food we ate during our 10 course meal and my best effort at descriptions! 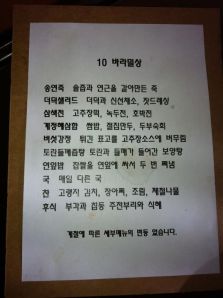 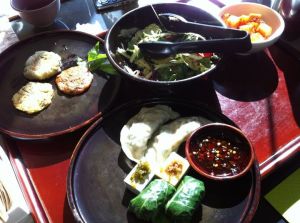 Cold taro root soup. Mom and Michael, I guess this is the root your fave taro frozen yogurt is made from! 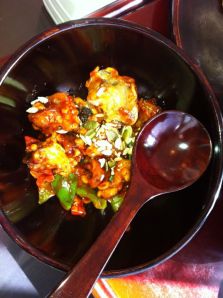 Fried mushrooms and peppers in a super spicy sauce!

The most delicious rice.  Boiled in a lotus leaf and stuffed with dates, pine nuts and jujubes. 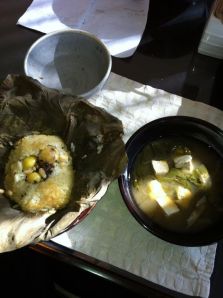 The rice with some tofu and seaweed soup.  Sort of like miso.  By this course I was stuffed!

Bibimbap fixins which I didn’t eat because I was already so full. Except for the kimchi, because I love it!

So yea, I ate a crapton last weekend.  The Koreans don’t mess around.  It was lovely though.  I’m glad to have all these cool new cuisine experiences. Last night Katie, Abby and I also had a ladies night in Hyewa with some soul-warming pho followed by a decadent dessert at Beard Papas.  They are Japanese massive cream puffs.  I first tried Beard Papas in LA because some of the Japanese dancers used to bring them in for us at bloc.  They can be filled with strawberry, chocolate, vanilla cream, etc.  The one I had last night was chocolate filled with what I think was green tea cream or custard.  It hit the spot, along with the nomtastic hot cocoa and a tiramisu type dessert Abby got.

My new fave pic and sweater.  Thanks Abneetika!

That concludes the food portion of this post! I am off to Busan for the weekend on Saturday.  There is a fireworks festival going on so a bunch of us are making the journey down south.  I am so excited to go to Busan, I’ve heard nothing but awesome things about the place.  It’s on the beach and on the side closest to Japan.  I’m sure there will be lots to report back next week.  And now I’m off to fetch me a Halloween costume.  Ciao ciao lovers! ❤