I realized that I’ve had so many visitors to Koko, yet I’ve never actually written about some of my favorite places to show people on their visits! What a realization to have 2.5 years after spieling my life away to the internet universe!

After having so many people come, I’ve gotten in the swing of making a list of all the must-sees, dos and eats to make sure they get a good dose of the unique, the fun, the traditional and the delicious during their jaunt.

Of all the sights to see in Seoul, by far my favorite is the Noryangjin Fish Market. I’m actually a huge nerd about this place. I really really love it! Though I realize that there are probably much better fish markets in the world, this was the first one I had ever been to, and it totally blew my mind! America doesn’t have warehouses filled with row after row of tanks with every sea slug and penis fish under the sea, so it’s one of those “I’m totally in Asia” things, at least to me.

When you first enter the market, you’ll come in from the 3rd floor where you are hit with the bright lights of the fish sale stalls.  If you come early enough, all the stalls will be open and there are some in the way back selling sauces at wholesale prices, and tons of other kinds of kimchis, and dried fish. I’m not sure what time those stalls close, but I think early because they’re usually all shut down by the time I’ve come for dinner. 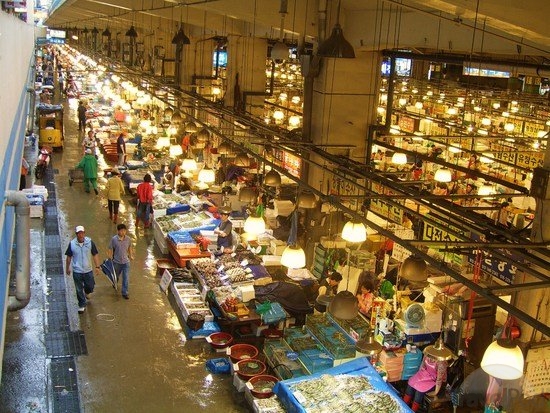 Everything is for the eating, and you can hand pick the sea creature that tickles your best fancy for the eating. The fisher person will scoop it up and (though quite sad) kill the fish right there on the floor in front of you. Prices are by weight typically, but like lots of things in Korea, with cash, prices can be negotiated, especially if you’re buying several creatures. After they kill it, they can sashimi it up for you right there, or dice it up so you can concoct a soup.

If you’re not one for the killing in front of you, nearly all stalls have pre-made plates of sashimi that usually run between 10,000-15,000won. They usually like to look down on you for not buying fresh, but whatever. Not everyone looks at every living creature as something to kill and eat like many Koreans.

My favorite thing to make people do at the fish market is try the sanakji, or live octopus. The baby octopi run between 3,000-5,000won, and they’ll definitely grab it right by the brain out of the water and slang it in your face because they LOVE making the foreigners jump! You may even find yourself gettin a squirtin from a silly man and his penis fish. 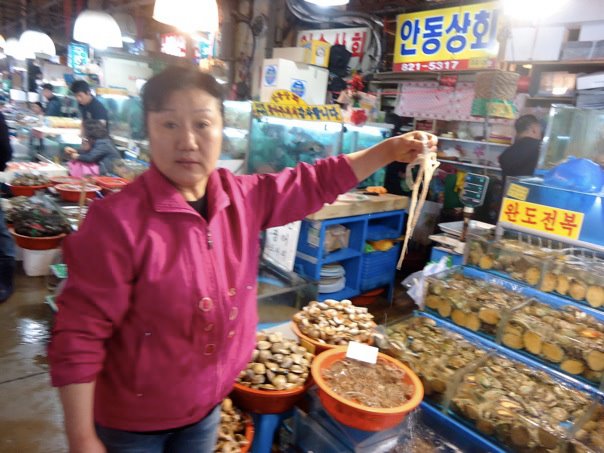 After fishing for your dinner, you’ve then got to head into one of the restaurants just behind the stalls in the very first row. These are some of my favorite places for a REAL FUN Korean dining experience. Nearly every time I’ve been with a visitor, we’ve somehow managed to attract the attention of a neighboring dining crew, typically ajussis, who decide they want to take shots of soju with us, or throw a couple monster crab legs our way.

When you sit down at one of the restaurants, just hand them your bag of creature, and they’ll do their wizardry magic for you. Sometimes you don’t know what to expect, like the time Cori and I got scallops and were horribly disappointed by the BBQness of them.

Then, other times you’ll be tremendously pleased with the outcome, like this last trip I took. We bought Sebastian the lobster and a heaping amount of shrimp that they steamed for us.  One word. BOMB. They also threw the remainder of the fish we turned into sashimi into a soup for us.

Shika, Dustin’s friend who was in town visiting, showed us all how to demolish and devour a lobster. Made me feel a little nostalgic for my felt Sebastian claws.

I decided it would be fun to play with Sebastian’s head and sea whiskers (I don’t know what you’d call those?) 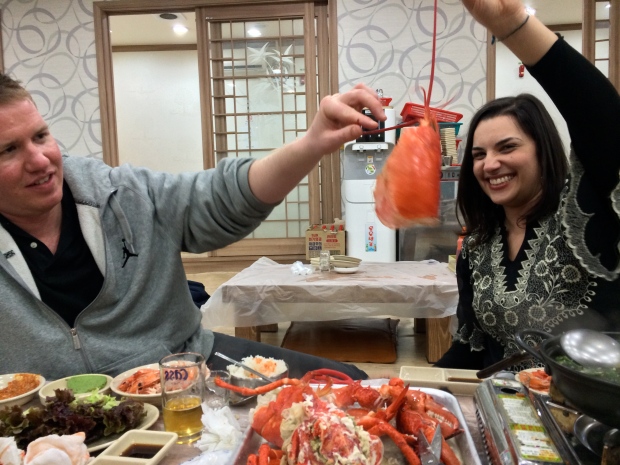 And the aftermath. Hugely successful trip to the fishery.

If you are on a first visit to the city, I 110% suggest going to the fish market. Even if you’re not into eating fish, it’s still super fun to walk around and explore and interact with the ajummas and ajussis running the stalls. From my experience, they freakin love foreigners!

Another little plus, if you’re finding yourself still not full, walk across the bridge from the fish market and go grab a hot dog wrapped in a pancake. So weird, but SO RIGHT.

Directions: Take line 1 or 9 to Noryangjin, and go out exit 1. Go up the stairs directly out the exit and walk over the bridge. You’ll enter a big warehouse and just go down to the 1st floor, and voila!