This post originally started out as a farewell to Korea, but then I thought, what the F, you just got to Spain and people want to know about THAT right now. They’re also probably noticing the blog name change, so you should probably address that.

So, if you didn’t notice, then you should get your eyes checked, and if you did, congratulations! Not really, but if you did notice then you can conclude that yes, I have arrived in Spain, and yes, tapperilla isn’t actually a real word.  Deal with it, because the ‘little tapper’ is now who I am, and I get to keep both of my 2nd and 3rd home identities in check.  Thank you to my fellow kookster for being supafab with words and the Spanish language.

Which now brings me to Spain and how you’re probably so curious about how I’m settling in, right? Well, I’m settled but I’m not settled exactly. I’ve been here for a week exactly as of 2pm this afternoon, and I’m still shackin’ up with myself, my salmon pants clad teddy, and my suitcase of air packed clothes in the tiny room at Hostal Veguin that I have oddly come to enjoy, mostly because I have no other choice.

Painful, right? The good news is that this teency hallway is located on the poppin Calle Fuencarral in Malasana, which is my neighborhood of choice, and where I’ve been striking out errrday in the apartment hunt. While patience is something I don’t have much of, I’m working on it and hopefully that means I’ll find myself a cozy lil home for all you fine folks to come visit soon enough. I’ve been piso hunting for a good 5 days now, which is far longer than any of my new friends took to find their’s. But, they also did get here significantly earlier than I did, and now everyone is here and pounding the pavement like I am. All I gotta say is thank you sweet Javier at the Spanish Embassy in Seoul for enforcing that I book accommodation for a full month rather than the mere week I was anticipating. Phew!

So yes, you read correctly, I’ve made a few friends! Hallelujah! The first night I was so sad and depressed and jet lagged over 4 timezones that I pretty much teary eyed myself to sleep because I A) had way too many things on my plate and no clue where to begin, and B) was lonely and friendless. But now I’ve gotten a fair amount of ducks in a row and met some lovely young ladies to go through the tedious process of setting our lives up together.

We had an orientation, which was pretty much anything but helpful since it was 90% in Spanish, though the part that was done in English was regarding the life set up stuff, so at least there was that. Since then, I’ve gotten Spanish digits, set up a bank account with EVO and can now pull money out at any ATM for free (once I get paid the big bucks, of course), locked down and loaded up my Abono to ride the metro, trains, and buses, and now start the waiting process of getting assigned to retrieve my TIE alien card. So things are coming together and seem a tad less scary than they did a week ago. YAYAYUYUH.

I don’t think it’s actually really hit me yet that I am legit living legally in Spain. Though everyday when I’m walking around I can’t stop gawking at the buildings and the juxtaposition of the insane graffiti, all while saying to myself and the air “everything is SO beautiful!” I don’t think that sentence will ever go out of style. 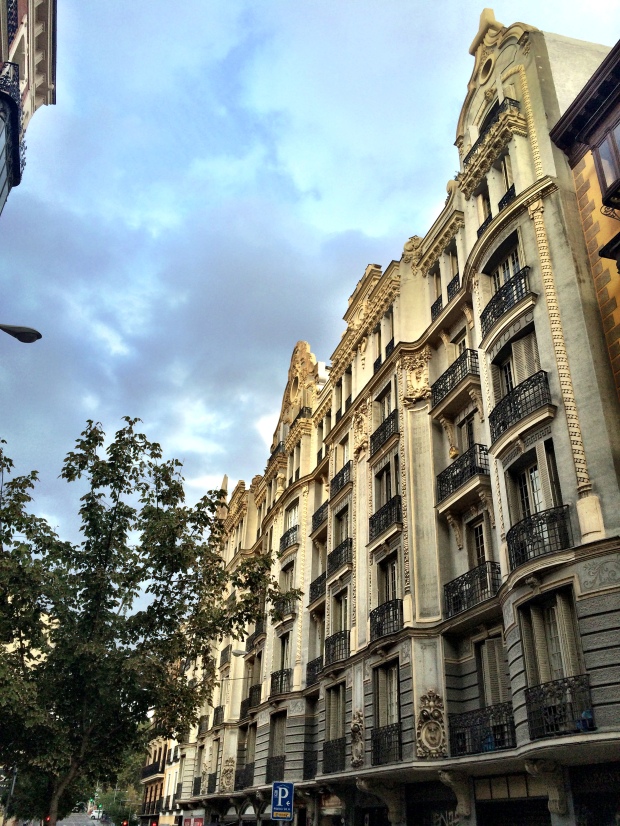 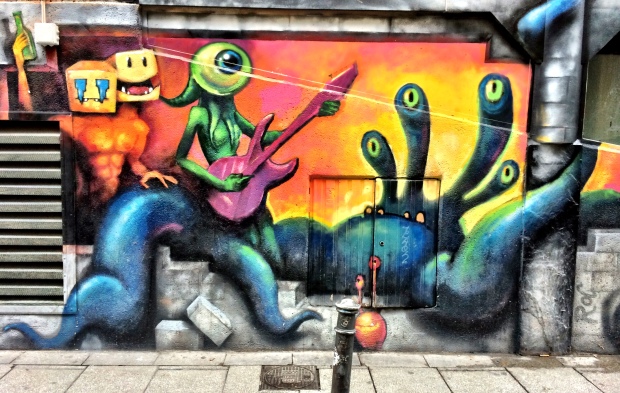 From the small area that I’ve wandered around, Madrid is so breathtaking. The architecture, the people, the fashion, and the passion I see just walking down the street. Literally, I have never seen so many couples, young and old, bodies smashed up against a building wall or railing in the most intense make out session midday. It’s unreal. I’m not a big enjoyer of PDA, and I hate to compare but I’m going to because I can, but Spanish make out seshs are so much better than Korean tummy tickle bwing bwing fests. So yea, the city so far is everything I have dreamt of and more, and this is just my unsettled self talking. Wait til I get a place and my clothes hung in my own closet.

I’m starting school tomorrow, and there is one other Auxiliar, maybe a third, I’m not sure, at my school. I got reassigned last minute to a bilingual elementary school, so I’ll be teaching more subjects than just English which makes me SO happy. I’ve been in touch with the bilingual coordinator, Carmen, and she speaks legit English all the way down to starting emails with “Hey guys”, and I hung out with the other Auxiliar, Stacey who is a guy, last night over tapas. Things are coming together!

For now, know that I am ok, albeit annoyed and craving my own home, but I can deal. Start looking into flights because I’m only moving into an apartment that’s cool with the whole world coming to see me and drink sangria.