Since school is out for summer, as English teachers last week and this week consist of  teaching a 3 hour a day English camp.  That means we get off work at 12:40pm everyday! Not too shabby!

At around noon on Friday, Jee texted me, Josh and Tim asking if we had any plans for the rest of the day. Our plans basically consisted of errands and laundry.  That is until Joshy remembered reading about an abandoned insane asylum and threw out the crazy idea of breaking into it. Of course we were on board….except for Tim, who gets a bad case of the willies when anything scary is involved. Scaredy cat.

From what I’ve read briefly on the World Wide Web, the history of this particular asylum is hazy. It officially shut its doors in 1996 after a slew of mysterious patient deaths, and the head doctor fled to the states. From the looks of it, they ran in a hurry because the place is in complete disarray with overturned chairs, jackets dangling from closets, patient files scattered all over desks, and towels still hanging in the public shower area. The abandoned building gets about 1,000 bold and daring adventure seekers per year, and made it onto CNN’s list of the freakiest places on the planet!

Our Friday was about to get a whole different kind of CRAY!

Jee had Mama Kwon’s car for the weekend, so she fetched Josh and I from Hyehwa, and then we sat in traffic for about an hour before even getting out of the center of Seoul. What was supposed to be about a 30 minute drive to Gwangju, Gyeonggi-do, took about 1 hour and 30 minutes.  Am I back in LA??

The only real directions we had as to the location of the Gonjiam Psychiatric Hospital were a pair of coordinates that Joshua kept telling us to plug into Google Maps: (37.362433, 127.33474). Well, those didn’t help us much, but thanks to our resourceful Korean, after arriving in Gonjiam, we crossed a bridge and continued up a narrow street which felt creepier and eerier as we got closer. Then, low and behold, there was the barbed wire enshrined gate and a massive DO NOT TRESPASS because CCTV has its eyes on you, sign. And voila! We had arrived! 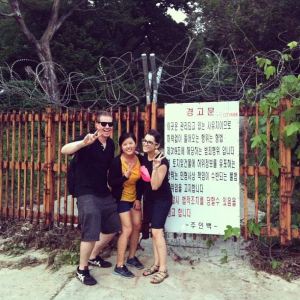 After jumping out of the car, not forgetting Josh’s mom backpack fully equipped with the necessities:  whisky, candle, bloody props and tarot cards, we came face to face with our first creepy sight of the afternoon. Looks like somebody was sent running for their life and poor Havaianas got left behind. 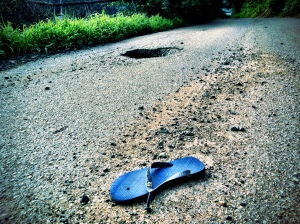 And after rounding the corner of the building just past the barbed wire fence, we stumbled upon a shed filled with mannequin heads and busts. 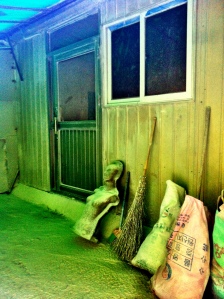 Just a wee bit spooked by now, we found the trail that would lead us into the unknown. Note to future trespassers: Wear runners because your feet will get MUDDY. Don’t dress in the name of fashion with studded sandals like I did.

After trekking through spider webs and muddy forest, we reached the road that leads up to the building.

When we finally got to the building, we were greeted by broken glass everywhere, cigarette butts, broken windows, swampy moldy stairs and the ever present predicament of how on earth we were going to break in!

To the right of the main staircase, there’s a wide green ladder perched to one of the top windows.  This ladder is secured in place by nothing but what appeared to be a heavy duty airplane seat belt, or belt used to buckle crazy people to their beds.  When Josh took the lead to try and climb in, he got a little freaked and thought it was going to fall or break, or that we’d contract some disease from the rust and dripping something coming down from the window. 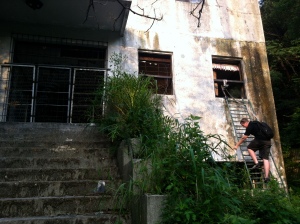 This ended up being the way we broke in, but for now we decided to put a hold on that way of entry and scope out the rest of the building for an easier way in. We found a window on the lower left side that we climbed through.  We scoured past moldy chairs and glass to go up a flight of stairs, only to find that it was shut tight.

Not ready to give up, we walked to the far end of the building and found some rusty bars and old bed springs blocking what we thought was maybe the entrance to a dining hall.  We shimmied on in there, tiptoed over a path of junk on the muddy floor, and found tons of graffitied walls, an old table and overturned chairs and trash.  Unfortunately this was as far as we could go from this entryway since everything was boarded up tight. LET US IN!!!!! 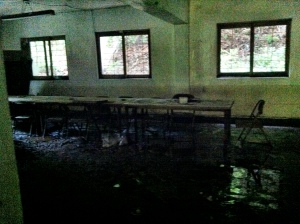 Two fails behind us, we went back to old faithful Mr. Wobbly Ladder. Josh went first to forge a path for his ladies. After getting caught in the seat belt fastening, making lots of strange man-grunts and moans, he had successfully moved the tetanus filled desks, chairs and cabinets that were barricading the door shut. I had a moment of panic while climbing through the window. With my history of falling in Korea, I saw my life crashing down 30 feet below me. But alas, I set a new record and successfully made it through, only to have a chair fall in front of the door forcing me to flex my muscles and move it myself in order to get into the asylum halls. 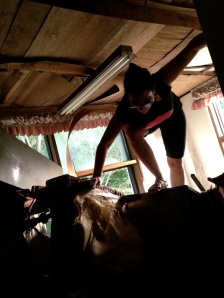 AND WE WERE IN!!!! Once inside, saying it was creepy is an understatement. The halls were so swampy and wet and reeked of the stench of mold, cigarette and hospital having a baby together. The Dr’s office was cluttered with piles of old patient records, overturned cabinets and jackets on the floor, and the bathrooms still had towels and buckets and blankets scattered everywhere. We even found a letter on the floor of one of the bathroom stalls, though it looked freshly written, so was probably placed by one of the other 1,000 sneaky daredevils. 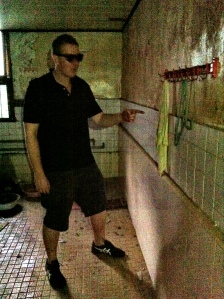 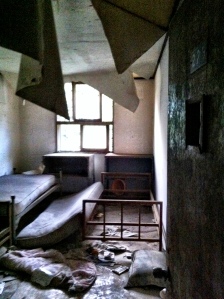 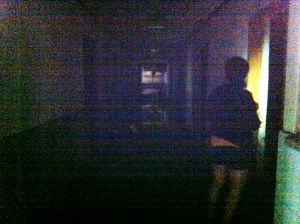 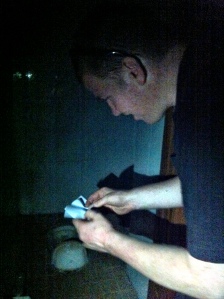 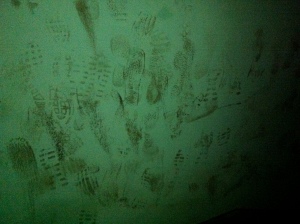 We ended up squishing through all three floors before heading up to the roof with a view. Too bad we didn’t have any makkoli to cheers our daring feat and ward off any ghosts. 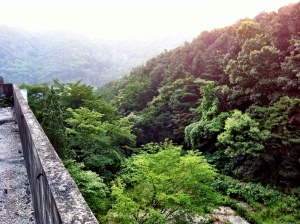 After coming down, we went back into the “KILL ROOM” for a seance of sorts. Remember those Spanish Tarot cards and candle Joshua brought with him in his mom bag? Well, our fortune teller took those out, handed out props and had us pick our fates in card form. With a swig of whiskey, a light of the candle and a knife through Jee’s head, fortunes were told.  Looks like Jee will be getting a visit from the Devil and/or a douche bag disguised as a gentleman. Or so the spirits told him. 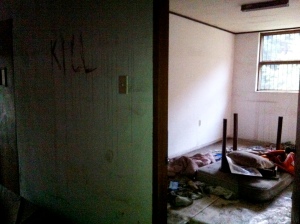 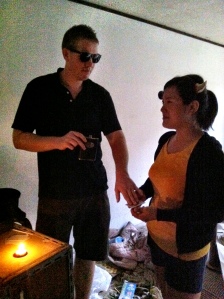 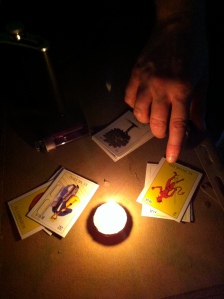 Of course we left behind our candle. The marker of our presence there, and a token in hopes of no spirits following us back to Seoul.

We ended up getting out a much easier way than we got in. We went out this door that was thrust open from the bottom up, saw where a massive tree had fallen and brought the whole structure down with it, and then shimmied ourselves out between some rusty bars.  Cue second mini panic attack as I thought the bench we had to step on was going to fall forward as I stepped. 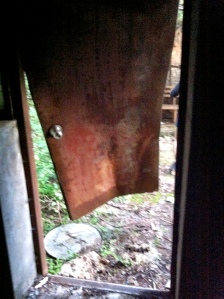 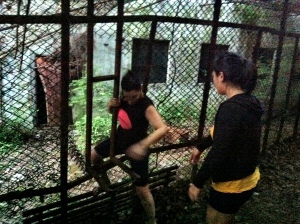 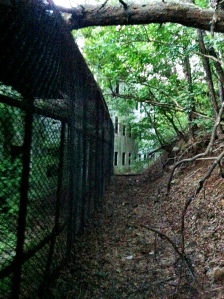 With the spirits, tetanus and mold behind us, we forged our way out through the spiderwebs and muddy pathway back to the car, where water bottle and hand sanitizer showers were in order. You can’t really tell here, but my feet and sandals were covered in mud, and not to mention, dirt and mosquito bites all over my arms and legs. It was well worth the adventure though!

This was definitely one of the coolest things I’ve done in Korea, and really ever! I love reading stories and watching shows about haunted places, so to actually have the chance to creep through one was awesome! Thanks Joshua for the random Friday jaunt suggestion!

For those looking to do something spooky in Korea, you have to head to Gwangju in Gyeonggi-do (NOT the one in the South). We didn’t take a bus there, but I know you can get one from somewhere in Gangnam.  You have to get to Gonjiam, and from the center of town cross a little bridge and turn right and keep going up the narrow road.  It’s a ways up, but the path starts just after you pass a 2 story brick house (pretty vague, I know). If you want, you can try and plug the coordinates into Google Maps: 37.362433, 127.33474. We weren’t too Google Map savvy, so we didn’t figure out how to do that, but it’s worth a shot if you know what you’re doing!