I sit here a week after returning from a very much anticipated long weekend jet out of town with a visitor I just couldn’t wait to be in the same time zone and touchable space with for the past 5 months. A very digital age meet-and-greet story short, Jerry came back to the Koko on a very big leap of faith after we spent a Valentine’s Day in the airport, and many a month Skype cavorting. Well, Skype doesn’t always translate into shooting stars, but I think a snarky and oftentimes brutally honest friendship came from a southern boy’s internet stalking efforts.

I have been wanting to get the heck out of Seoul for a bit now, my lungs have been pretty desperate. Top of my list on the main land has been Gyeongju, which was once the capital of Korea, and is where you can learn about the Shilla Dynasty of Korean history past. It is the cultural epicenter, and where you go if you want to walk in Korean history, not to mention, breathe glorious fresh oxygen.

So, as soon as Jerry Berry arrived from Shanghai, we hitched a KTX train ride down south from Seoul Station to Gyeongju, with a quick transfer to the Mungunghwa slower train. I love train travel, and we wanted a little longer jaunt on the way down. On the return we came direct from Singyeongju station, which is slightly more out of the way from Gyeongju, but has a direct KTX line to Seoul.

I had never stayed in a love motel (which is exactly what it sounds like) since being in Korea, so I booked us a room at the swanky Sugar Motel on the sexy love motel street. Since we were planning to be total tourists on this getaway, we took the free pick up from the train station that was provided, and the lovely Miran fetched us upon our arrival. Ajumma visor modeling was provided on-the-house from the backseat. 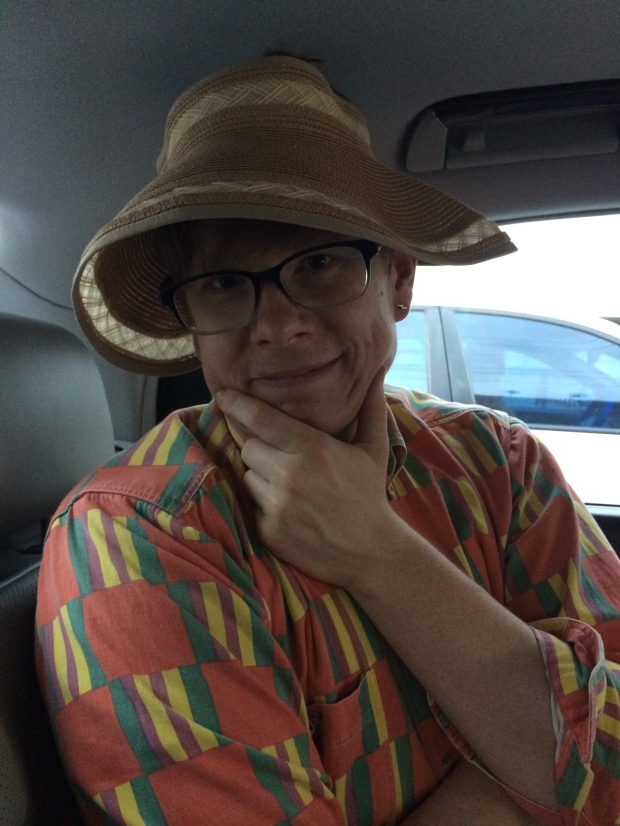 We were greeted with elevator Astrology. Are Aquarius and Libra compatible? I guess we were to find out.

We had one full day in Gyeongju, so the next morning we had a leisurely sleep in, and went off to rent some bikes for a couple hours. I think I always mention that biking in foreign places is one of my favorites ways to see a city, and this was no different, except that there are people EVERYWHERE in Korea, and add a holiday weekend. So, there was lots of swerving. I even saw a woman plummet straight for a curbside lunch. For once I wasn’t the one eating shit, and Asians suck at driving in all its forms.

Gyeongju is scattered with these spectacular rolling green hills which are actually tomb mounds, and they’re all over the city. They are stunning! We visited Cheonmachong, meaning Heavenly Horse tomb, which is believed to house one of the Kings of the Shilla Dynasty. This particular tomb was named for the horses that were found painted on a saddle that was found during excavations in the 1970s.

It also proved to be a spectacular setting for selfie-stalking (or as Selena Meyer would say “Ussie” stalking), which also happens to be another of my favorite pastimes in the country of narcissism.

We stumbled upon some gangsters who were climbing a trail up to the top of one of the mounds, and just as I was about to shlep our asses up there, the ajussi police came and ran them off. So instead of rebelling, we biked some more in search of a park that we soon realized was far too far for our little bicycles. So we forded a river and followed this little lady down her alleyway. 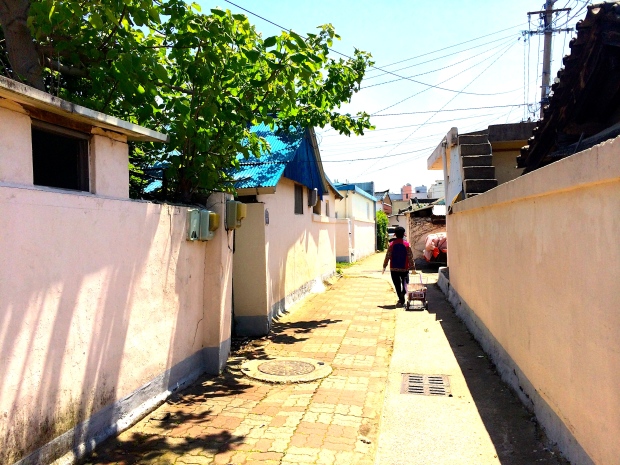 I also found what resembles a massive menorah downtown. L’chaim!

That night, after getting a tad bit lost, we got a jeongsik (정식) dinner, which is a meal comprised of a bunch of sides. It’s super delicious and usually comes with soup and tons of plates to cover your table. Our first one happened to be a baby jeongsik. I believe this one cost around 5,000won/person! Not too shabby.

After stuffing our bellies, we oriented ourselves and walked across town to Cheomseongdae Observatory, which is claimed to be the oldest observatory in all of Asia. Glory glory Korea! I wasn’t super impressed, but I did read that this observatory is built of 361.5 stone slabs, which is equal to the number of days in the Lunar calendar. Ok, so some scientific thought went into the construction.

We took this horrendous selfie as a souvenir. 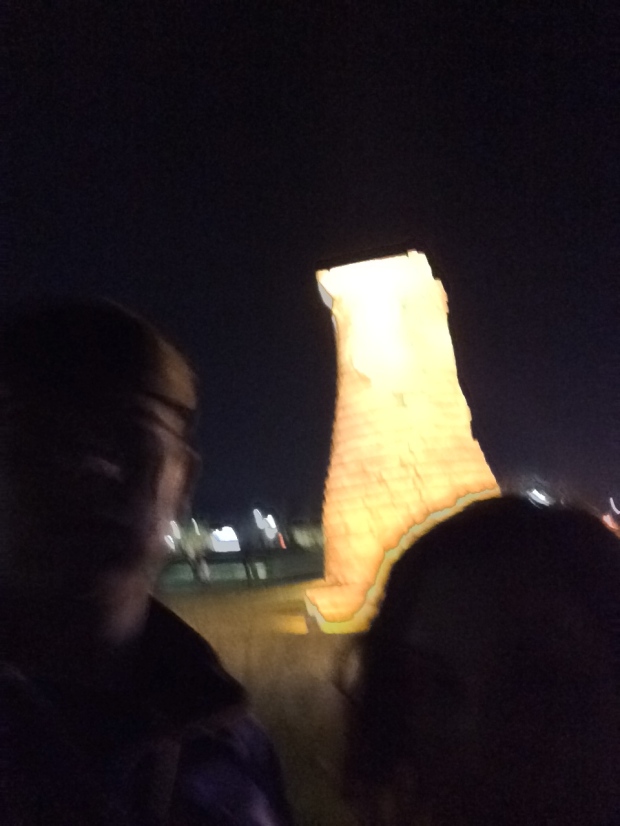 And this one of these people with their asshole arm extender.  Then we peaced on out to Anapji Pond, which disappointingly enough, we got there too late to see in its illuminated glory. Sadface.

Tuesday was actual Buddha’s Birthday, so we got up at the crack of the morn and hit the road to make the most of our half day before shlepping back up to the ol’ concrete jungle. Before hopping a bus, we needed to caffeinate, and he needed to continue documentation of the horizontal stripe phenomenon in Korea for the mind-blowing science project that he’s conducting.

Stripes taken, we popped on a bus headed for Bulguksa Temple, a UNESCO World Heritage Site that is about 35-40 minutes outside of the city center. We took this ussie where Jerry continued to practice his smile.

Bulguksa is beautiful, and there were some prayers and speeches going on while we wandered the grounds. I think all temples in Korea look the same, but they’re still quite perty to see. I especially love the lanterns they use to adorn during Buddhist holidays.

We made some friends.

This Jew is always trying to find beauty in a Buddhist symbol turned disgusting. 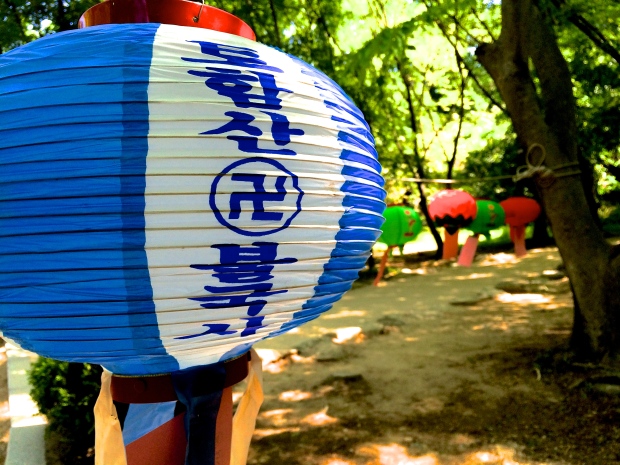 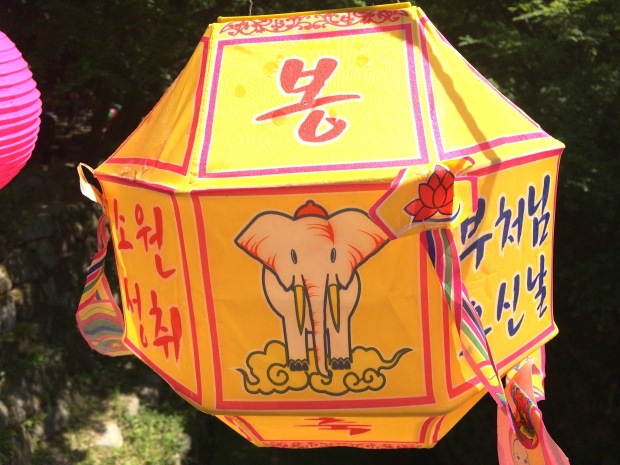 I stalked a bit, per the usual.

We were going to head out to Seokguram Grotto, but alas there was no time. Seokguram was also recently declared a UNESCO site, so I’d like to see that at some point.

Our last meal in Gyeongju was another jeongsik, this time much bigger and with a lot more variety. We were actually on a sardine cramped bus headed back to the city center when we passed it, jumped off and bolted across the street. This place was really cute and traditional, and we got to sit in our own private little room on the floor instead of standing pressed up against the man’s farting ass next to us. 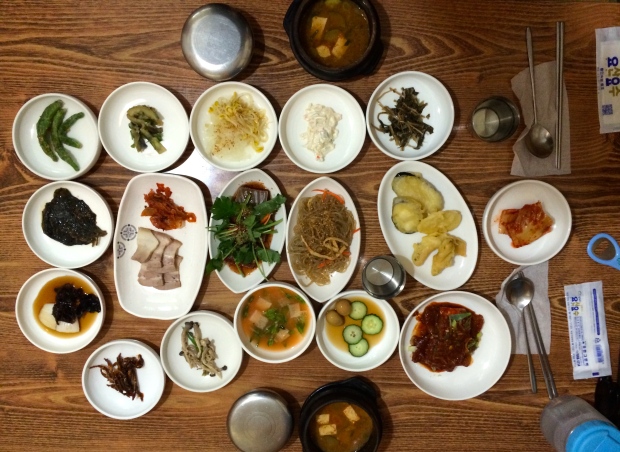 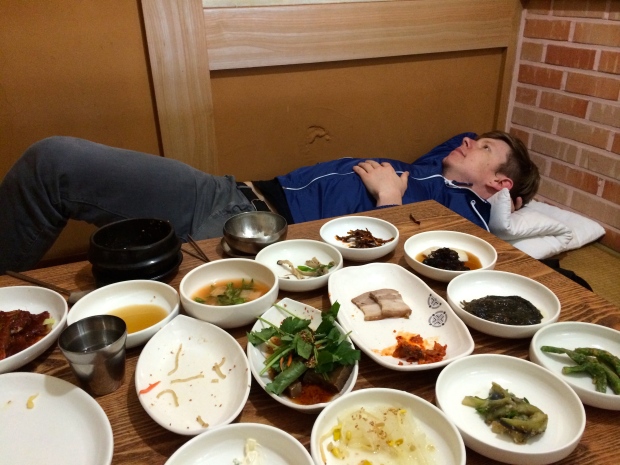 I really really loved Gyeongju and am so glad I finally got to visit. It’s so quaint, and I’d say one of my favorite places I’ve visited during my time in Korea. Living in Seoul, it’s so easy to get swept up in the big city life where things can become mundane and sort of easy once you get the hang of life, even while still being in a foreign country. However, this weekend I felt like I was out of my as-of-late element for the first time in a long time, and I needed that in a bad bad way.

Have you been to Gyeongju? Any must see places or tips should I take another wander down yonder? Let me know!