Last I wrote it was pouring rain, and the weather isn’t getting any better.  It’s starting to get absolutely freezing here, and even me, the person who sweats in the rain, is keeping a coat on with the heat blasting in my classroom while teaching a classroom full of hot-bodied elementary school kids. That being said, I am even more afraid of the winter. Eeep!

Two weekends ago a group of us headed out of Seoul for the 2nd time and ventured to Busan for a fireworks festival.  Busan is in the South, on the side closest to Japan.  This trip was quite the bumpy one, but oh well, it’s all a learning experience I suppose.  I think I was really annoyed/in a funk to begin with on Friday night once I realized I needed my passport for the return on KTX (the train that takes 2.5 hours to get from Seoul to Busan).   Katie, Collin and I met at Katie’s to watch “Drive” and gawk at sexy Ryan Gosling, and I planned to head out to HBC to crash at my friend Mark’s that night.  Instead I had to back track to the Dontgogay to get my passport (which I ended up not needing!) and then head out towards Mark’s.  I don’t think I got to his place til almost 1am, but bless his little curly haired heart for leaving me a key so old lady could crash while his young ass got buck in none other than Zen.  The next morning me, him and Abby woke up at the crack (I think they were still drunk) and made our way to Express Bus Station (with a minor detour to Seoul station on accident first.  Oops!) We met Matt, Katie, Heather and Nick at the bus station but ended up missing our 7am bus by like 5 minutes!! We ended up having to rebook our tickets for the 8:20am bus, which actually ended up being far more luxurious (name that movie quotable!).  The seats were like first class airplane seats, and that was the only bomb diggity plus to the 6 f’ing hour bus ride that cost us the same as taking the KTX (always listen to people who know what they’re doing…lesson for the day!)  The bus also dropped us off an hour outside of the center of Busan, so it took us 7 hours to actually get into the city.  Erg! Oh well, lesson learned.

Once we arrived in Busan, none of us with umbrellas (except smart Mark Antony), we were greeted with a downpour of rain.  Welcome to Busan!!!  We got $5 umbrellas/parasols and made our way to the little motel where 5 of us crammed into 1 room.  Erg. The fireworks were right on the water, which was like a 2 minute walk from where we were staying.  The fireworks festival was a competition between 4 countries – Korea, USA, Poland I think and one other.  It was super cool and I got some perty pix!! 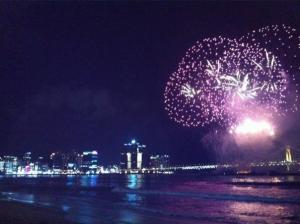 That night before going out, I got kind of in a shitty funk, and in true moody Danielle fashion, stormed off out of the motel and wandered down the beach.  I think it was a combo of things getting to me all at once, being irritated, still feeling sick and then really missing sista and my friends at home.  I ended up not going out to the club with everyone that night because I would have just been a bitchy pain in the ass to myself and others, so I sent myself back to the room and talked to my lovers back home for a bit before passing out.  Erg, lame way to spend my one night in Busan but oh well.  Shit happens.

The next day I woke up still in a bit of a funk but I think I snapped out of it soon after we got to the beach and it was gorgeous out.  We went to Gwangalli beach, which isn’t the main one there, but it was so fun.  There were tons of games laid out on the sand and swarms of people and their babies just playing and having a good time. There were also some ridiculous face-painted beach actors roaming around sneaking up on people which was hilarious.  It was also the perfect venue for a creeper like I to take some creepy shots that we all know and love. 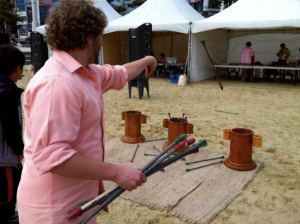 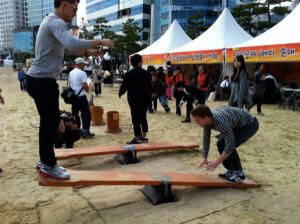 Men being children for a day. 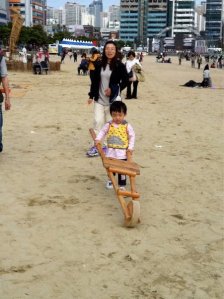 Korean businessmen just kickin it on the beach. 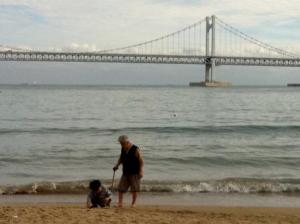 Sunday we were supposed to take KTX back at 6:30pm (18:30pm, please keep this in mind). Turns out Mattheu Pierre mistakenly purchased tickets for 6:30am instead of pm.  He was upset, but we ended up re-booking seats for the 10:50pm train that night.  All of us were exhausted, some had to lesson plan, and none of us wanted to get home at 3am, but that’s what happened.  To kill the 4 hours we still had left in Busan, after walking through some seedy alleys, the 7 of us crammed into a DVD bong, which is a place where Korean couples go for some privacy (since they all live at home with their families).  The little man laughed at us when we said we wanted a room to squish 7 of us into, but we made do.  No orgy here.  So we all crammed into the musty room to indulge in some Inglourious Basterds.  None of us used the roll of toilet paper that was strategically placed beside the bed/couch.  All in all, I guess it’s good we all got back in time and didn’t have to call in sick.  I looked like shit the next day, and could have fallen asleep standing up. Eeep!

This catches me up to this past week.  Sorry, I suck at updating in a timely fashion.  Anyways, this past week was lovely.  One of the highlights was my date with my lovely friend Veny.  We were bus mates from the airport to orientation and are both old ladies.  We had a major catch up date filled with gossip over dinner, some lattes and a hard Hello Kitty waffle, at none other than the Hello Kitty Cafe.  It was so f’ing cute.  I also met some street tappers along the way.  Turns out one of them was a trainer for Billy Elliott in Australia, so I’m gonna start taking classes with them next Monday!  Yay!! God bless Korea and their amazing dancers!!!

This weekend was also Halloween (well, today rather). I finally settled on being a Black Swan hooker and I was so pleased with my costume!  I originally bought a black feathered skirt, but my ass is too big and didn’t fit into a large by Korean standards.  I ended up spending an embarrassing amount of money at American Apparel for a leotard and petticoat, then chopped the feathers off the other skirt and used my high school sewing skills to deck the petticoat out in feathers.  I then gave myself a makeup test run Friday night after watching some overly-dramatic Youtube tutorials.  I can say this was the most effort I have ever put into a Halloween costume and I loved it!

Saturday night I went out, but I felt it to be a bit of a bust.  Abby and I trekked from Itaewon to Hongdae for our friend Nick’s birthday party.  Turns out the line was ridic so we didn’t end up going, and hung out in the park drinking Makkeoli with some other peeps and a Silent disco.  It was fun for what it was, and I at least felt like a celebrity when random Koreans came up to me asking for a photo.

With Thing 2 & a Sailor Mooner 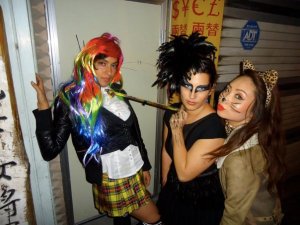 In a seedy alley-way in Itaewon. meOW.

And now it’s Monday morning, Halloween, and it’s Sports Day at school.  This means classes are all cancelled and the kids are doing crazy dances and sports outside.  I was supposed to have a Halloween party in my afterschool class today so I brought a crapton of candy that I spent way too much money on at Costco last night.  I guess that means Halloween continues tomorrow and Wednesday because I am not keeping all this candy for myself.   Now I’m about to go back out and watch the kiddies because they are so damn cute.  I keep thinking I can’t even fathom how it must feel to be a mother, because I keep taking a bagillion photos of these kids and they’re not even mine.  Yikes.  Well, off I go to watch more of the cuteness and let my heart burst even more.

Oh, and Happy Halloween and Happy Birthday to my Adam Reff (if you read this).  Love you tons!!!!